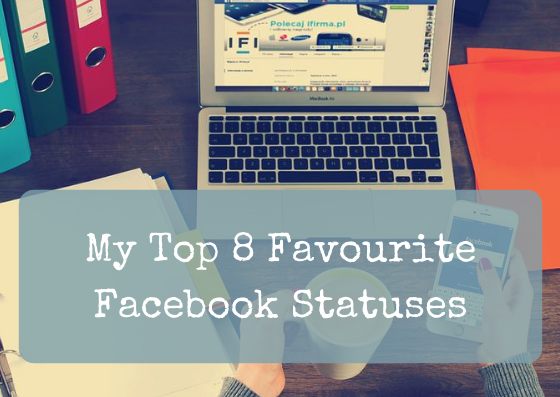 This one is inevitably followed by a period of silence, with replies from friends, such as ‘oh no babe, I’m so worried now – what’s wrong?’, ‘OMG – hope you’re OK ‘. For added effect, the original poster will then say something like ‘I’ll be OK but I don’t really want to discuss on here’.

If you don’t want to discuss it on Facebook don’t post it on Facebook. If you do want all of your 300 acquaintances to know you’re at hospital say what’s bloody wrong with you. ‘Xxxxxxx is pissing about on Facebook at xxxxxxx Hospital whilst waiting to have plaster cast fitted / rash inspected/ cream applied’ will be fine.

If you want a shoulder to cry on, phone a friend. If you want to rant, have a good rant. If you want to tell someone they’ve pissed you off, text them / call them / punch them / burn down their house. Your friend from primary school who you haven’t seen in 30 years probably doesn’t need to know you’re having a shit day.

3. ‘Just to let everyone know I’m having a break from Facebook. I just need to spend some time focusing on myself. I might post again in a few months, but probably not’.

What is this status for? Are you hoping that your 6th form school teacher that you added by mistake when drunk will read it and try to talk you out of it? ‘Noooooooo please don’t stop posting pictures of your dinner – it’s the only thing that gets me through the day’.

The likelihood is that no one will notice you’ve stopped posting, as they’ve probably set it up so they never see your posts on their timelines anyway! If you want to stop posting shit for a while, stop posting shit for a while! Just don’t then post a video of your neighbour’s dog wearing a tiara 2 hours later or the results of the test that tells you which Disney Princess you are most similar to…

4. ‘I’ve had a massive Facebook friend clear out, so if you can still see this post you’re one of the lucky ones – LOL!!’

Oh for fuck’s sake get over yourself. If you haven’t culled me then I’ve no idea why as I have never interacted with any of your posts and can’t honestly remember who you are. And if I had been culled I wouldn’t have noticed anyway, so what are you hoping to achieve from that post?!?! Plum.

5. ‘I know most of you don’t read my posts, so to prove you do I want you to reply to this post by saying what you like most about me / where we met / what breed of gerbil I prefer / how many moles I have on my arse. Then copy and paste it as your status for 73 days whilst changing your profile photo to a donkey’s penis. But YOU MUST PASTE IT NOT SHARE IT’

So to summarise, you are aware that no one can be arsed to respond to the never-ending stream of shit you normally post on Facebook, but you now want me to spend 5 minutes doing some stupid shit – time that I could spend more productively doing literally anything else. Like braiding my pubic hair. Yeah – good luck with that.

6. ‘Can anyone tell me what time Asda closes today’ / ‘Anyone know what the weather forecast is for next June in Bulgaria?’ / ‘Can someone tell me the email address for McDonald’s head office?’

Are these people mistakenly typing these questions into Facebook rather than Google?! Are they really expecting someone else to Google the answer for them and then post it on Facebook for them?! Bells.

7. ‘It’s probably fake but you’ve got to be in it to win it!’ accompanied by a shared Facebook post from the shittest attempt at a fake giveaway ever created.

Probably fake you say? Is that because the post from FirstChoiceUK giving away 10 luxury trips to The Bahamas that you’ve shared is from a page that only has 25,000 followers, only has one post and features a stock photo of Ibiza with Richard Branson holding an envelope and a Pina Colada?!

If you’re that gullible, at least try to hide it. Unless you’re going for twat of the year there is no benefit of you being ‘in it to win it’, you massive carrot.

8. ‘Opinions please! My husband isn’t breathing, is lying on the floor in a pool of blood and has a massive gash on his forehead. Has anyone seen anything like this before? I’m not sure whether to ring 111 so thought I’d check with you guys first. Quick responses appreciated as the blood is starting to ruin the suede rug!’

Jesus wept, Debbie! Get off Facebook and call a pissing ambulance or something! Speak to someone with some actual medical training perhaps, rather than relying on Barbara from the school run to offer her insight into traumatic head injuries! Christ on a freaking bike!