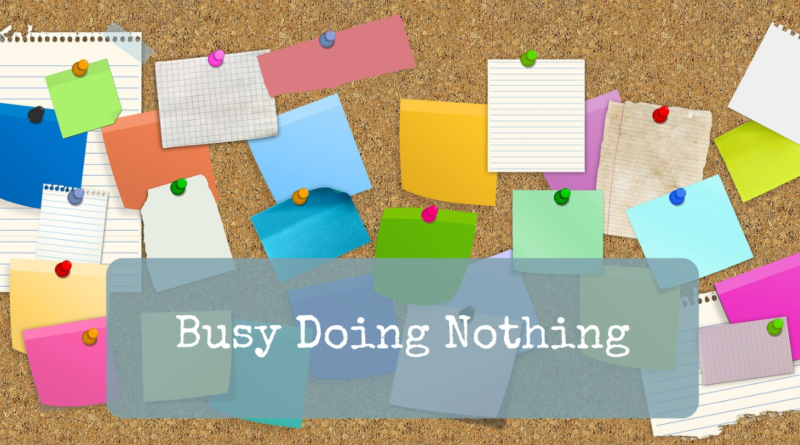 I’m generally OK at doing most things. I can turn my hand to DIY, writing, puzzles, games, planning, working – to the extent that my mum complimented me the other day by saying I was a Jack of all trades, and a master of none. At least I think it was meant to be a compliment!

However, the one thing I’m absolutely no good at – at all – is relaxing. Sitting around doing nothing stresses me out no end. Spending a day achieving nothing makes me angsty – and I think it always has done.

Tonight, for example, Sarah has been staying at her mum’s house so I’ve been home with Joshua. Traditionally I would use such times to get some stuff done around the house, perhaps rearrange some furniture, or sort through some old stuff or do some laundry, once Joshua was safely tucked up in bed. This evening, however, I really can’t be arsed.

In part this is due to the fact that I’ve spent the last few weeks tidying and decorating the house ready for it to go on the market. The end result of which being that there isn’t really much to sort through, or to tidy or decorate anymore because it’s kind of already been done. Coupled with the fact that it’s a bit rainy and dark and gloomy and that Reading have just lost again and that the housing market had died on its arse due to the interest rate rise, everything is feeling a bit…meh.

So as someone who gets angsty when he doesn’t achieve things, finding myself in a mood where I can’t be arsed to achieve anything isn’t ideal! Tonight I’ve been sitting here achieving nothing whilst trying to work out what I could be achieving, but not successfully working out what it is I could be achieving, thus continuing not to achieve anything and getting gradually more frustrated with myself for not achieving anything.

Even back at school and university I always needed to be completing something. Whether it was organising an event, or playing some football, or going out for the evening, or talking to my housemates until 3am I always needed that feeling of being busy. Sitting there with nothing to do isn’t me.

Things being incomplete has always bothered me too. I could never be one of those people who starts an essay, or blog post one day and gradually work on it throughout the week until it’s finished. I get a flash of inspiration and have to do it until it’s done generally. Handing something in, or hitting submit, or send, or publish, or seeing a completed bit of DIY is the win for me. I take comparably little pleasure in ‘the journey’ – for me it’s all about the end result. I’ll happily go back afterwards and improve on it, or correct any errors, but it needs to feel done. I need to have achieved it, or it will bug me until I have achieved it.

I also like to feel in control of achieving the thing I need to achieve. I violently dislike having to rely on other people to get the thing done that needs to get done, to the extent that I’ll often end up doing it myself just to get it done. This is potentially why I’m finding this whole house selling thing so frustrating.

The buzz of getting the house tidy and decorated and looking awesome for the estate agent photos and video was great. There was a real sense of achievement when it was all done and (literally) dusted and in my mind people would then flock to view the house. Obviously this has not panned out quite as hoped, with anyone with half a brain holding off on making any major purchases until interest rates sort themselves out and banks start offering reasonably priced mortgages again. It makes sense that no one is looking for a fairly expensive house at present. But it’s still INCREDIBLY ANNOYING!

Worse still, it’s incredibly annoying, completely out of my control and something I cannot step in and fix regardless of how much effort I put into it. All in all, a massive ballache and something that will most likely continue to make me feel a bit angsty for many weeks to come!

Hopefully hitting ‘publish’ on this poorly structured mess of an article in a few minutes will tide me over until tomorrow when hopefully I can find something more substantial to achieve.

Or perhaps, one day, I’ll realise that just having a relaxing evening of recharging the batteries is an achievement enough in itself…