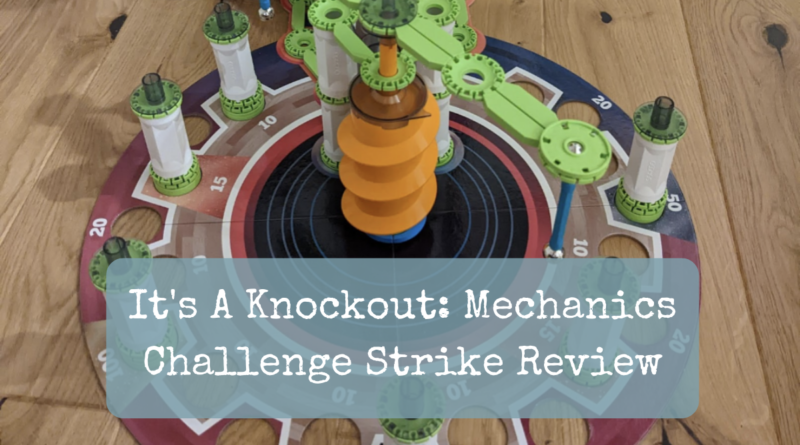 We have a lot of excellent Geomag items spread throughout our house, dating all the way from Joshua’s toddler days through to present day. We have always been massive fans as every item we’ve ever owned from Geomag has been colourful, well designed and inspired creativity and fun.

We reviewed the brilliant Geomag Confetti a couple of years ago and over the past couple of weeks we’ve been trying out Mechanics Challenge Strike! This one is quite different to the Geomag items we’ve had in the past as this one lets you build, but then allows you to play a game too. In fact, once you’ve followed the instructions and built the game, the bulk of your time will be spent playing rather than designing and building, so for us it is a very different type of Geomag product than what we’re more familiar with chez Hopes.

But is it actually any good? Well, in short, yes, it’s great fun, although it did take us a little while to get it set up perfectly! Let’s have a proper look…

What’s in the box?

As you can see below the set comes with a game board, instructions, various plastic building components and balls. As you’ll find out later the 24 metal balls are an essential part of the game and the entire motor mechanism depends on them to function.

The one thing that did strike us as we went through the building process is that there are a fair few parts that don’t appear to be part of the game. Despite going through the instructions multiple times we just couldn’t find a home for them. Not an issue, of course, but just something that foxed us a bit, so be prepared to have lots of spares!

The building process was fairly straightforward. There’s only 7 steps to work through in the instructions and there are pictures to guide you along. Joshua is pretty good at construction so followed the guide fairly easily, but we did find there were a couple of parts that required some adult input. These were mainly trying to work out how to line up some of the plastic parts. Although the instructions give some targeted images to help, I still found that it took a bit of trial and error to securely clip some sections together.

The important thing was that we managed to get it to work after a few goes, and it’s actually really fascinating to watch how it all operates.

As you’ll probably work out from the video below, the arms attach to a gravity motor which is itself powered by the metal balls, causing the whole thing to rotate. The faster and more constant the metal balls are entered into the motor mechanism the faster the arms rotate.

Around the edge of the game area you place skittles, which are themselves built during the construction process. The aim of the game, roughly speaking, is then to knock down the skittles using the rotating arms. Sounds simple, but it is a lot of fun, and takes a good bit of practice so feed the balls into the motor at sufficient speed to reach the higher scoring skittles.

We all had a good time trying out the game, and it can be quite frantic as you can see below!

There are a few different methods of playing the game, including by connecting extra bits to the skittles, but all involve feeding the balls and knocking down the skittles, so it’s all pretty simple to play and genuinely good fun!

The good thing about this kit is that it involves two separate elements – the construction, followed by the playing. Taking on their own, the long-term use would be limited, as the build itself is fairly straightforward and the game is not over complex, but combined together we got a good few days of fun out of it. It also impressed a few family members, as Joshua demonstrated how the motor part operated and everyone had a go at knocking the skittles down.

The set itself is aimed at ages 8+ which I guess is because some parts of the construction are a bit fiddly and require some patience. The skittles game itself is suitable for most ages I would say, as long as your little one is old enough not to want to pop the metal balls in their mouth!

Overall, a great concept that cleverly combines construction and play. It’s something that Joshua got a lot of fun out of and I’m sure most kids around the same age would equally enjoy the experience. Another couple of plus points are that it doesn’t require batteries and is made from 90% recycled plastic which are both important factors in our home.

It’s currently available from major retailers priced around £40, including Amazon and is well worth a look.