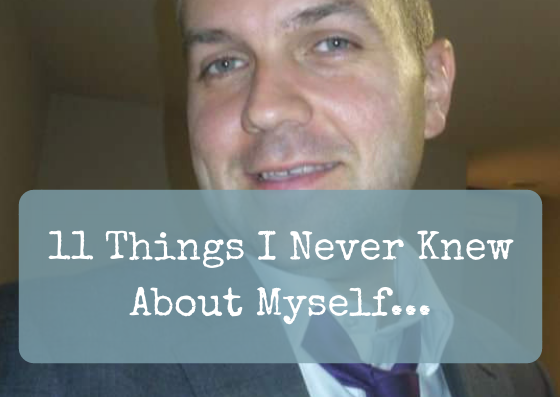 Becoming a dad was and is an awesome experience and helped me discover lots of things I never knew about myself. Here are some of those things:

1. I have cat-like reactions and decent peripheral vision

If it wasn’t for these, Joshua would have toppled / jumped / nosedived from the changing table 72 times,the stairs 14 times, the window ledge 8 times and the back of the sofa 4 times.

2. I actually have baby-related emotions

In the past I’ve never had an interest in other people’s babies. When they were passed around at a party like a screaming, vomit-ridden pass the parcel I would politely decline. Or get more buffet food or pop to the toilet to avoid looking like a heartless weirdo. I never had an interest in buying gifts for other people’s babies. I never did the ‘goo goo goo’ thing at babies at they were wheeled down the road. I always said those feelings would come when I had my own child, but was never sure if that was just wishful thinking. So when Joshua ‘popped out’ it was a relief to find that I did have those feelings. Once I’d gotten over how big and purple his hands were of course…

3. I can change shitty nappies without vomiting

I never had any great desire to clean another person’s arse before Joshua was born. Not surprising, of course. After all, I doubt many people have babies purely because they want to change nappies. But having now changed hundreds of them and not vomited once, I can safely say I’ve nailed it and it’s just another part of being a dad!

4. I get frustrated quite easily

I’ve always been quite a logical and patient person, but babies / toddlers are not logical people. No amount of verbal reasoning will persuade Joshua to get down from tables, or to stop banging doors or to eat his dinner (or go to sleep tonight it seems!). This causes frustration in me that I hadn’t quite expected when I was reading the baby books. Hopefully as he gets a bit older he’ll be more responsive to rational arguments!!

5. My concentration span isn’t what it once was

‘Posy got on the scooter. She went up, she went down, she even tried to do a trick’

‘GOOOOOOOAAAAAAAALLLLLLL!!!! Get in Sturridge you beauty!! Have some of that Wales!!!!’

6. I am useless at parenting on less than 6 hours’ sleep

In fact I’m useless at everything these days if I don’t get enough sleep, partially due to my advancing years no doubt! With 4 hours sleep my parenting style is similar to a blow-up doll – lying on the sofa with a permanently shocked expression getting climbed on and grunted at!

I never used to have emotions. Now I cry at things. That film about time-travelling with Rachel McAdams and Margot Robbie – tears. The Unmumsy Mum first chapter – tears. 24hrs in A&E – tears. Anything to do with Children in Need – tears. Running out of vodka – tears.

8. I take too many photos of Joshua doing not-very-exciting things

9. I get angry over small things

Like people without children parking in parent and child spaces. ‘Oh hi BMW driver you appear to have forgotten your pissing child’ or ‘Ooopsie Mr van driver your child appears to have turned into a fucking toolbox’. Fortunately being British I usually tackle these offenders by staring angrily at the back of their heads. That’ll learn ’em.

10. I may have become slightly forgetful

11. I occasionally do stupid things

Tonight I managed to accidently convert this post from published into draft and then deleted the whole thing. So this is the rewritten version based loosely on the original which I posted 3 days ago. It might be better than the original – but it’s pretty unlikely! Hence my list now has 11 points rather than 10 ??

So there we have it – some of the many things I never knew about myself. Fatherhood has changed me in so many ways. Some aren’t good, but most are awesome and I definitely think I’m a better person now, even if I sometimes feel like I’m wrestling an oily squirrel, whilst swimming through treacle, whilst wearing a blindfold.

For more on the baby months check out The Baby Months section!