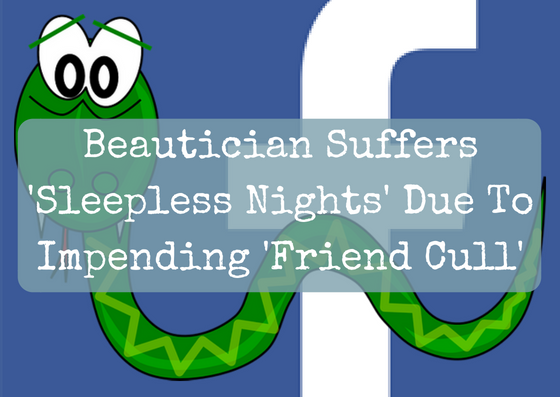 A woman from Bury suffered ‘sleepless nights, emotional distress and a fear of impending doom’ after a Facebook friend announced a ‘serius frend cull’.

Beautician Donna Wonner, 25, became Facebook friends with Megan O’Bed after they bonded during a bikini wax in 2012.

‘We both had 4 kids, 3 dogs and a Fiat 500 so we had a lot in common. Amazingly we’d both been to Butlins when we were younger too so the similarities between us really were amazing’, Donna revealed.

Shortly after Donna had finished ripping the hair from Megan’s nether regions she sent her a Facebook friend request and they have been friends ever since.

But Megan’s shocking announcement about the upcoming cull really shook Donna to the core.

‘It was just so out of the blue’, explained Donna. ‘I had been reading that Megan had been ‘fummin’ after having ‘mayjor ishues with sum snacks 🐍🐍’ on Facebook but I never thought it would come to this.’

Megan, who has undertaken 4 ‘culls’ in the past 2 years, posts a scintillating mix of dog photos, upcycling attempts and Candy Crush updates, and Donna was terrified that within 48hrs Megan may no longer have been a major part of her life.

‘I know I haven’t seen Megan in ‘real life’ or even spoken to her since that day at the clinic but I don’t know what I’d have done if I was no longer part of her life.

The suspense and worry of it all was killing me. The thought of her going to A&E again or completing another level on Candy Crush without me knowing about it through Facebook was terrifying.

It would have been like we were just 2 people who met once at a waxing place.

I know Megan had a lot of trouble with snakes but culling her best friends like me would have been so drastic.’

Donna, who survived all 4 previous culls, including the great cull of 2017, felt this time might have been one cull too far for her.

‘I cried myself to sleep during each of the last few culls but just managed to survive each one. This one felt different though. This time she’d said it was a ‘serious’ friend cull so I feared the worst.

I prayed on my kids’ lives that I’d wake up to find a status update from Megan saying something along the lines of ‘if you can read this you’ve survived the friend cull’.

It meant EVERYTHING to me. Yes I have 3 kids, 2 dogs and a Fiat 500 but what would be the point in living if I couldn’t see what Megan had Fabloned this week?!’

The suspense came to an end when Megan posted yesterday:

‘If u can reed this u hav sirvive my frend cull. If u carnt reed this u are now wiv the angles 🧚‍♀️🧚‍♀️ wiv all the over snacks 🐍🐍’

‘I know some people might think I’m silly to say that surviving the cull has been the best moment of my life so far, considering I have 2 kids, 1 dog and a Fiat 500. But it really is.