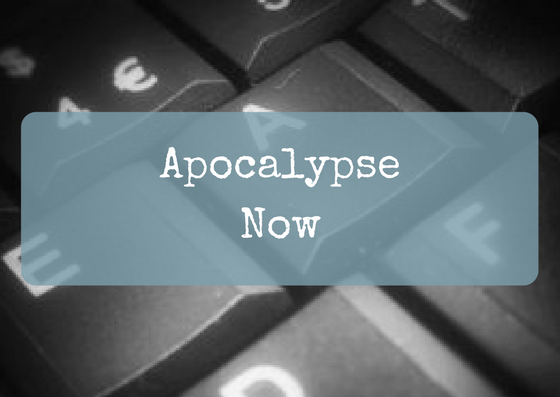 I have a confession to make. I have joined some online blogging groups. There. I’ve said it. I’m not proud. I know what sort of people lurk around in these God forsaken places. But I have it under control. I know what I’m doing. Probably.

It has been an interesting experience so far. Learning the new language was an early challenge. I soon discovered new concepts too, like “guest blogging” which is where writers tootle off to breed cats in the Congo for a fortnight (or similar) while random strangers queue up to write their post. Why anyone would allow this is beyond me. Perhaps I’m missing a trick?

The groups are safe places to ask advice and discuss problems too. This week, a blogger was shocked and saddened to learn that she had accidentally started World War III by posting what could politely be described as a parenting “opinion piece.” President Trump must have been on fire and furious.

The first paragraph of the post was enough to tell me that she had turned up at a gunfight with a water pistol. Having randomly squirted the gang leaders, an unceremonious mowing down occurred during the resulting crossfire.

It was never going to end well. Once the ill-informed genie was out of its sterilised plastic bottle, there was no going back. The topic? Yes, you’ve guessed it. “Bottle v Boobs.” What could possibly go wrong?

Keen to help future generations avoid the same tragic fate, I have put together the definitive (just thought up) guide to blog topics to avoid if you insist on being one of those irritating parent blogger types. Which you shouldn’t, as all it achieves is yet more tedious reading dumped into the giant blog bin in the sky.

Bottle v Boob
According to the dictionary, I am technically classed as a man. As a man of maturing years, I am slowly gaining the apparatus to facilitate feeding, if not the actual ingredients. Even if a medical miracle were to occur to help inform my scribbles, I am wise enough to run the other way. Every mum, and I mean EVERY mum, has established their position and they are going to defend it to the bitter end. Cat, meet pigeons. Lemmings, meet cliff. Blog, meet delete key. It’s for the best.

Stay at Home v Back to Work
“Why have children if you’re not going to bother looking after them?” or “I’m making this sacrifice FOR my children, actually” are common opening gambits here. Unless you are a financial planning expert, know the domestic circumstances and support circle of every potential reader, and have recently moved to a mountain cave, back away from the keyboard. If you do go wading in, avoid the term “working mothers” at all costs. Don’t say that I didn’t warn you.

Disposable v Reusable Nappies
We were going to do the earth mother thing and save the planet. We managed about a week or so too. Then living in the world’s coldest house during a subzero winter and that utterly repugnant smell proved too much. If you persevered, good for you. Have a medal. We missed out on bronze. Bothered?

Dummy v No Dummy
Yes, everybody is aware of the potential ear and dental problems caused by using dummies and the flip side of a lower risk of SIDS occurring. Our children went dummy free, but the youngest had constant ear problems (yellow “pusks”) as an infant and is still a thumb sucker aged three. We repeatedly tell him it will drop off but he’s having none of it. Nor does he believe that the other thing that he constantly plays with will drop off either. You simply can’t win.

Children need to eat and drink. Like adults, a variety of foods are required to gain a nutritional balance. Which is all well and good, right until your child randomly stopping eating previous staples in aged two. If you’re lucky. Do what makes you happy (not your kids) and stop going on about it. It won’t matter what you do. Trust me.

Piercings and Snips
An discussion complicated, rightly or wrongly, by these practices being ingrained in certain cultures. Circumcision is traditional in Jewish and some Muslim communities for example, to symbolise faith in God, and piercings are ritually administered to the children of Chavs. It’s a braver man than me that would take this topic on, and I’m not keen on getting glassed. Next.

Sleep Training v Co-sleeping
Do whatever it takes for everyone to sleep safely. End of debate.

Routine v Attachment Parenting
Clearly there’s pros and cons to both. But if your little darling is actually a little sod a couple of years in, then whatever your choice was, it was the wrong one. OK?

Natural Birth vs C-section
“Oh, you had a cesarean? Were you disappointed?”
“Not really. My baby had his umbilical cord wrapped around his throat, but the doctors got him out safely.”

Pretty Much Anything to do With Parenting
Never mind blogging, it’s just safer not to reveal your position on anything as someone will get the hump. Get that fence comfortably between your cheeks and stay put.

To summarise, it seems that it is better for parent bloggers to avoid writing about anything. Which is exactly what I just did. You’re welcome.

This post was first published here. For more from Babysitting The Kids just click on the beautiful drawing below or any of the recent posts. It just might be the best thing you do today!