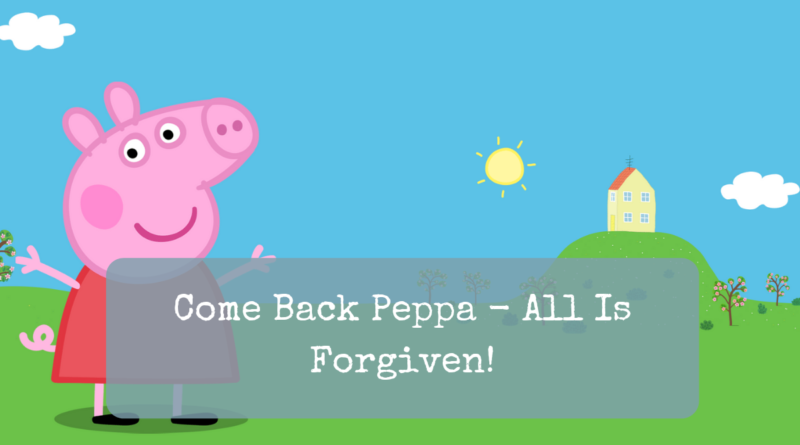 We had a love / hate relationship with the pink porcine protagonist, Pegga Pig, and her pals when Joshua was younger. Now though we can officially admit that we miss Peppa Pig. Yes, she could get a bit irritating after the 7th or 8th consecutive hour – especially when we had already seen EVERY SINGLE EPISODE FIFTY TIMES – but all things considered we enjoyed having Peppa in our lives. Well, more accurately, we enjoyed having Miss Rabbit in our lives, but you can’t have Miss Rabbit without a big old splodge of Peppa.

I even wrote one of my favourite blogs posts of all time about Peppa Pig – and cocaine – so for that reason too she will always have a fond place in my heart. Oh, and not forgetting Peppa Pig was also infinitely less wank than that absolutely pile of vomit known as In The Night Garden.

So, with rose-tinted piggy glasses in hand, let’s compare the halcyon days spent with Peppa Pig and pals with the shit show days of now, spent with some of the world’s biggest bell ends. Who will win?!

Peppa Pig taught Joshua a lot of useful things over the years. Like how to recycle, and how to plant vegetables and how to be a good friend. It also taught me how to build a house in 2 days, how to retrieve my keys if they fell down a drain and whether English split infinitives are a form of irregular verbs or past pronouns.

So far, YouTube has taught Joshua to call everyone ‘guys’, to say ‘fricking’ after every few words, how to build literally everything in the world on Minecraft and how people with very limited talent can make millions by talking bollocks on the internet.

You always knew where you were with Peppa Pig. She might have been an irritatingly nasal little shit bag at times, but you knew she wasn’t going to drop the F-Bomb at a moment’s notice. You also knew that the most violent video game that would feature in an episode was Happy Mrs Chicken rather than a plethora of hacking and slashing.

Watching YouTube is genuinely a rollercoaster ride. You can be watching something very pleasant and light and breezy and then a couple of clicks on the suggested next videos later and the whole thing can take a dark, sinister turn with ‘shits’, ‘piss’ and ‘bollocks’ round every corner!

Peppa Pig may have occasionally made me want to gouge my eyes out with chopsticks, but it definitely had its comedy highlights, even for adults. I can watch an episode of Peppa Pig now and smile through it – maybe even chortle a few times. I would even go as far as saying that some episodes are even funnier than Two Broke Girls and Mrs Brown’s Boys. Although, to be fair, plucking my own pubic hairs is more entertaining than Two Broke Girls and Mrs Brown’s Boys.

I feel the urge to be balanced here, as some stuff on YouTube is actually quite amusing. We all loved Pat & Jen, for example.

However, most of the YouTube videos that are designed to be funny are about as amusing as a particularly challenging bout of amoebic dysentery. Joshua does appear to find them funny though – they just aren’t unfortunately…

Peppa Pig episodes were only about five minutes long. On the plus side, they were over fairly quickly. On the downside there were normally about 817 of them played in a row. The short length did also mean you could be perilously close to something horrific being just minutes away, such as that ultra-starey cow-eyed devil child Dora or another one of Iggle Piggle’s smack-induced horror fantasies.

However, it did mean we could tell Joshua he could watch one episode more before bed as a handy countdown timer.

YouTube videos on the other hand can seemingly range anywhere from a couple of minutes in length to your entire adult life in length. If you really want to waste entire days of your life that you can never get back, pop on a nice ‘How I survived 100 days in Minecraft’ video and weep uncontrollably as your life flashes by you. Unfortunately this does now mean that you need to be really careful when agreeing to let Joshua finish the video he’s watching before bed, as that episode may not end until he’s in his late 20s.

YouTube has so far given him just the one option – talk-bollocks-in-loud-annoying-voice-whilst-playing-Minecrafter. Admittedly it does seem to pay pretty well and provides millions of followers, so perhaps there is something to be said for it.

Winner – Peppa Pig for variety, but YouTube for fame and fortune.

So there we have it. Conclusive proof that Peppa Pig is better than anything that’s on YouTube. And that 95% of presenters on YouTube shows are absolute weapons. We may never have thought at the time that it was ever going to be a possibility in later life, but it can no longer be denied. We miss Peppa Pig!