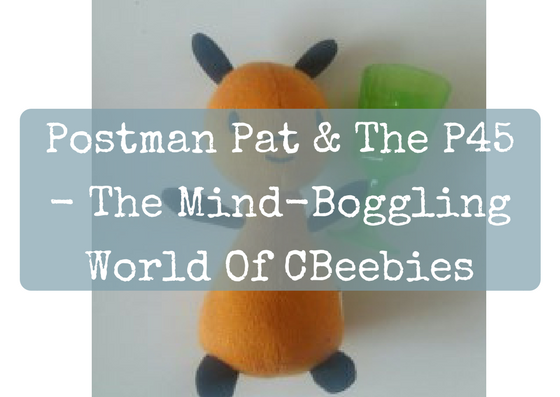 Once upon a time, J and I were relatively normal people who discussed the grown-up television issues of the day, like the identity of Red John in The Mentalist, or when winter would finally get the f**k on with it and arrive in Game of Thrones.

Now that CBeebies has become the soundtrack of our lives, the true marker of time (it’s going to be a looonnng bloody day if you’re up pre-Chris and Pui) we find ourselves analysing the ins and outs of its offerings far too frequently…

Postman Pat and the P45

The man has the cushiest gig going – six, maybe seven people to deliver letters to, tops, plus the odd special delivery to the local school. Yet he is never, ever on time. Not even close. What’s worse is that the villagers have become completely conditioned to it! Whilst Pat gallivants across the hills chasing the latest victim of his ineptitude, some poor sap checks their watch and sighes, “It’s not like Pat to be late…”.

YES IT F**KING IS!!! Where have you been the last three series? Open your eyes Mrs Goggins!!!

My best guess as to why he’s still gainfully employed is that anyone else with the very specific helicopter, light aircraft and boat licenses required by the Greendale postal service these days has found a slightly more lucrative position…

Raa Raa, you are… a bit of a bellend

My main beef with Raa Raa is the sadist who decided that the best time to schedule jingly-jangly ear-splitting fun in the jungle was 6.45AM! What’s required at this hour is coffee and calming voices, not some noisy little knobgoblin roaring at anything that looks sideways at him.

It feels like I’ve missed the all important pilot episode of Bing which explains how a menagerie of talking baby animals came to be looked after by bean bag people half their size. The houses/furniture etc. are adult-sized, so where are they all??  My sister’s theory is that it’s some kind of hostile alien takeover and this is the part where the new alien leaders subtly brainwash the young to accept the new world order…

It’s clearly affecting Bing, whose crimes are escalating daily – stealing, mindless vandalism, butterfly murdering…but luckily, nothing ever phases the unflappable Flop. Although I like to think that he spends at least some of his time screaming silently into the fridge before trudging off to clean up Bing’s latest mishap.

Topsy and Tim – where the fun never begins

Genuinely interested to know who is actually watching this? Admittedly my toddler is not their target audience, but I can’t imagine any child is sitting there, mouth agape, hoping against hope that Mr Rosen’s wheelie bag arrives in time for his weekly shop, or punching the air in delight when Daddy Odell finally finishes the swing set he’s spent the entire episode screwing together.

It is however entirely possible that my dislike stems from the perfectly groomed Mrs Odell making me feel like a totally inadequate mother. The wrapping paper hasn’t arrived for Kerry’s birthday present? No problem twins, let’s head over to our designated crafting area and whip up some home-made stuff! I bet she doesn’t have ANY wine in her fridge. And not just because she drank it all the previous day…

Trapped In the Night Garden

We made the rookie error of incorporating In the Night Garden into the bedtime routine, so for fear of jinxing the whole sleeping through thing, we now have to sit through 28 minutes of Iggle Piggle and co EVERY NIGHT. Given that a little piece of me dies every time Makka Pakka trundles over looking for Tombliboos to sponge down, I think the least they could do is put a bit of effort into sorting out the blindingly obvious scale issues. The ball CANNOT be the same size as the Pinky Ponk and yet small enough to be held by someone who fits inside the Pinky Ponk. It’s just not possible. Sort it out guys!

Please tell me it’s not just me lying awake at night trying to figure all this out??

This post was first published here. For more from Pass The Wine Please click here, or check out some of the recent posts below.