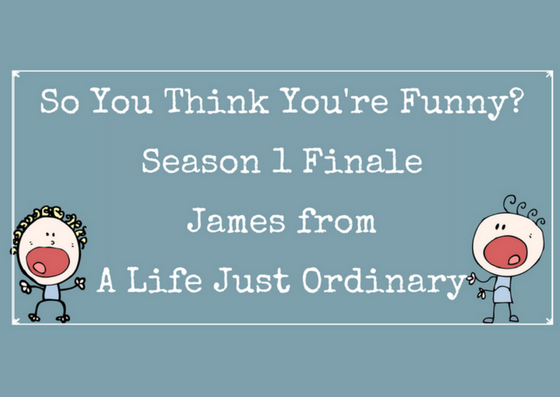 Whilst we’re getting ourselves all prepared for the next exciting series of ‘So You Think You’re Funny?‘ we’ve thrown in a Series 1 finale episode for your delight and amusement. That’s the good news anyway.

The bad news is that the ‘star’ of our finale is James from A Life Just Ordinary / You Have To Laugh. Yeah, I know it’s quite a let down. But now you’re here you might as well have a read through anyway, right? What harm can it do?! 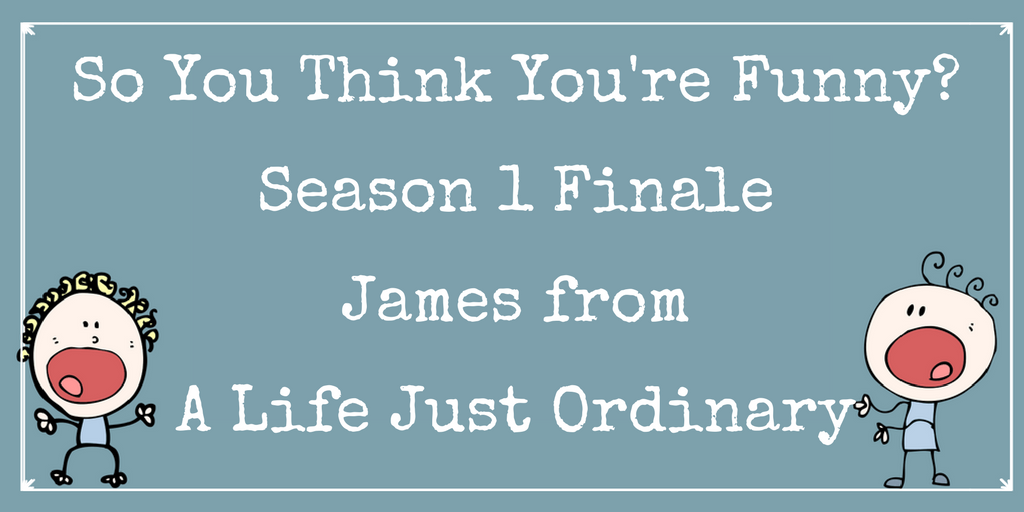 2. Now do the same as if through the eyes of your enemy:

Joshua makes us laugh pretty much every day with his increasingly comical learning and incorporation of the English language. Recent treats have been ‘Wait a second. I’m just trying to think.’ ‘Hello, little belly button. Are you having a nice day?’ This evening he also decided that he no longer liked any of the world’s dinner options. ‘I’m going to tell Nanny that I don’t like ANYTHING!’

4. Do you try to be funny when you are writing? Tell us a bit about your blogging ‘process’.

Yes. I don’t bother writing anything unless I think it’s going to be funny! I’m not someone who could just write every detail of what I have done with Joshua every day, because I would bore myself shitless! For me, unless what I am writing is going to make someone FEEL something then there’s no point in writing it. Equally I won’t read anything unless I think it’s going to make me feel something. Sad, happy, angry or hysterical are all fine – but feeling nothing after reading something is an awful waste of time!

I don’t really have a ‘process’. In fact this question is only in here because Fran was adamant that this interview series shouldn’t have any deep and meaningful questions in it and absolutely nothing as naff as asking about people’s ‘blogging process’. However, whilst it is still a question, I can honestly say that I don’t plan any posts in advance, have never used scheduling for my own blog and don’t do drafts or anything useful like that. I will generally just think of something that amuses me whilst I’m driving / in the shower / lying in bed. I will then hopefully remember that amusing thing until I get a spare hour to write a post! I’ll then knock it out in one go and hope it’s funny.

If it doesn’t flow naturally and quickly it’s probably not worth writing!

I think the one about taking a toddler to a BBQ is my favourite post, although more recently the one about social media went down pretty well. The BBQ one is quite visual I think and tells a good story. The social media one is pretty niche and probably only really interesting to other bloggers but you might just enjoy it!

1. TV Show? – Celebrity Juice is pretty funny when it’s got decent guests. The Big Bang Theory can be funny from time to time. Even Everybody Loves Raymond I used to love. Only Fools & Horses was a classic. Just NOT 2 Broke Girls.
2. Comedian? – I was a big fan of Lee Evans, even if he was slightly sweaty. Peter Kay can be great.
3. Writer/blogger? – It’s tough not to say Fran from Whinge Whinge Wine, as she can be pretty mean when she’s angry. She is pretty funny too, to be fair. Dawn from Rhyming With Wine. Sam from Mouse, Moo & Me Too. Beth from Beta Mummy. Suzanne from and another ten things. They’re all brilliant and there are loads of others brilliant bloggers than have featured on this website! But, although it’s a bit cliche, I would say Sarah Turner, as The Unmumsy Mum got me into this whole blogging thing – and she is very funny!

I can be a bit quiet at first so most new people probably wouldn’t notice how incredibly funny I am. But yeah I think I’m quite amusing when I’m in the right mood, especially after a few drinks. Or just irritating. One or the other.

‘The other day I went to the zoo. There was only one dog in it. It was a shitzu.’

Anything with alcohol in it. JD and coke ideally. Cocktails – preferably when on the beach or by the pool on holiday. Fruit cider. Occasional glass of rose. Not fussy.

Probably fajitas or anything Mexican and cheesy! I’d quickly resemble a pink balloon, but it’d be worth it!

Dora gets on my tits. Far too starey and cheerful. Not a fan of talking backpacks either.

My blog, A Life Just Ordinary, is just a dad’s eye view of parenthood, starring a very lively and cheeky 2 year old. It’s not going to win any awards. But if you do visit you’ll be in a pretty exclusive club as it has fewer viewers than the 90s BBC drama series ‘Eldorado’. Some of it is actually pretty funny, if you like that kind of thing, so you might as well have a quick look. What’s the worst that can happen?!

I also spend an inordinate amount of time co-running a comedy parenting website called You Have To Laugh. You might have heard of it. It’s really very funny – mostly because it’s 95% written by other people!

Well that really is it for Season 1 of this groundbreaking comedy interview series. It’s been a roller-coaster ride of mixed emotions and no mistake. But if you thought Season 1 was ‘amazing’, you’ll be literally blown away by Season 2. If we can get anyone to agree to take part…