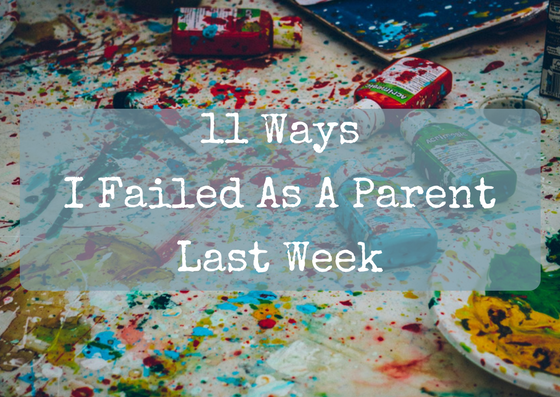 A couple of weeks ago I composed this post. Then I decided that I couldn’t post it. Why? It was a little too honest. Here I was admitting how I had failed as a parent.

Surely, that is something I should be keeping under my hat: wrong! I have spoken about the pressure to be the perfect parent before. We have the toolbar of shame on the Daily Mail, where one minute they are criticising celebrity parents for spoiling their children, and the next minute they are criticising the same celebrity parents for not helping their children enough.

Then there is social media which again can make us feel like we live in a world of perfect parents. I am equally guilty of this. I like to take nice photos for my Instagram feed. They often feature a happy looking Youngest or Oldest. What you can’t see is what happened on the morning/afternoon that the picture was taken. I have made a lovely film from our weekend. However, this is an edited version of life. I chose not to include the moment Oldest pelted out of the sea, shouting about Youngest

This was shouted loud enough for the whole of Jersey to hear. The shame. However, I shouldn’t feel the shame. This is life. This is parenting.

Some days everything goes swimmingly; we even allow ourselves to feel smug. Other days, it becomes more like an endurance match, and we are counting the time down to bed. We love our children, but it can be unpredictable and sometimes is like living with two mini dictators. Therefore, I am going share my parenting failures with you all. I am confessing how I failed at parenting.

“But I want to know where DICK is”.

I should have explained why we don’t really shorten the name Richard to Dick because the next day she told her friend,

“I watched a brilliant new TV programme. I can’t remember what it was called but it had a DICK in it”

Cue horrified look from parent. I then hastily explained that she was talking about The Famous Five, and that she was referring to a person called Dick, not male genitalia.

Last week, might have been hard and I might have felt that I was failing on so many levels but really I wasn’t. As a parent there will be times when we feel overwhelmed. There will be times when we look back at our day and realise that we could have handled things better, but that is the joy of hindsight. However, (here comes the cheese) I didn’t really fail because despite all of these little failures my children are happy. Therefore, I had a successful week 🙂

Let’s embrace our parenting failures, how did you fail at parenting last week?

This post was first published here. For more from the brilliant Island Living 365 click here or check out some recent posts below.

This is an example widget to show how the Left Sidebar looks by default. You can add custom widgets from the widgets screen in the admin. If custom widgets are added then this will be replaced by those widgets.