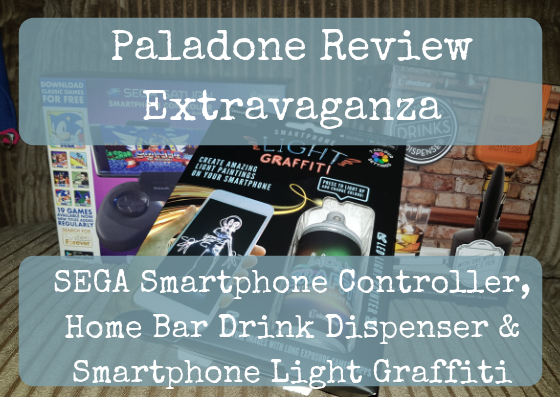 Last year we had the pleasure of reviewing a really rather cool Smartphone Telescope courtesy of our friends at Paladone.

With Christmas a mere fortnight away we’ve been gifted three times as many cool things to cast our eyes over this year! So if you’re still looking for a few last-minute stocking fillers for your nearest and dearest you’d be well advised to have a nose at the following:

First off, an admission. I’ve never actually owned a SEGA product in my entire life.

I’ve certainly played on a fair few in my youth but never personally owned one. I freely admit that this is a sorry state of affairs but I was much more into my Sinclair Spectrum and then my PC than I was into any console.

That all changed when I reached my 20s and began to play an excessive amount of football games on my Xbox but by then the dominance of the Megadrive and SNES had long since passed!

So it was with a longing glance back into the early 90s that I opened the box for the SEGA Saturn Smartphone Controller. The Saturn, you may recall, was the console that came after the Megadrive and before the Dreamcast, so fitted neatly into the mid-90s.

The controller itself feels exactly like an old SEGA Saturn controller, as you might expect, and pairs pretty easily to your smartphone via Bluetooth.

All you then need to do is download some of the decent catalogue of 1990s SEGA games for free from the Google Play store. I tried out two of the real SEGA classics – Sonic The Hedgehog and Streets of Rage 2.

Each game can be played solely with your phone using the touchscreen, but they are soooooooo much better using the controller! The device lets you connect your smartphone directly to the controller so it feels very much like a handheld console, much like this:

You can also keep the phone separate through the phone mount so it’s like controlling a proper console (only smaller!)

Controls feel responsive and it’s very easy to quickly get immersed into some of the classic gaming moments of the 1990s. There are loads of games available to download so you won’t get bored easily, and even though the graphics aren’t quite on a par with an Xbox X or PS4 the gameplay is awesome!

If you also fancy reliving your past, or want to delve back into the history of console games I can definitely recommend the SEGA Saturn Smartphone Controller from Paladone. You can find it here, for around the £30 mark and it would make a great gift.

What better way to liven up an evening spent reminiscing about the 90s than with a tasty tipple served from a pretty funky-looking drinks dispenser?

It can handle a wide variety of bottle sizes from small beer bottle up to a litre of spirits and more. All you need to do is screw the handle on, insert an extendable straw (supplied) into the base and insert a bottle of your choosing onto the straw and into the base. Here’s one I made earlier:

Buy a few of these and you’ve got yourself a pretty awesome home bar, ideal for Christmas parties. They retail for around the £12 mark and can be found here.

Last on the list was this can of ‘graffiti spray’ which is actually a pretend can that emits light when you press and hold the nozzle down. A double press and you get a different colour.

Quite cool itself but even better when you team it with a long exposure app on your phone or the relevant settings in your camera.

All you do is download an app and then set your camera to take a long exposure photograph. This is ideally done in a pair or with your phone held in some kind of device so it stays very still.

You then ‘spray’ the can and watch the cool light effect photos you can create, like the one below:

This was just from a very quick experiment but with a bit of practice you can make some awesome images.

This one is around the £10 mark and can be purchased here.

If these three very different items have sparked your interest, there’s loads more just like this on the Paladone website so it’s well worth a look for some last-minute inspiration.