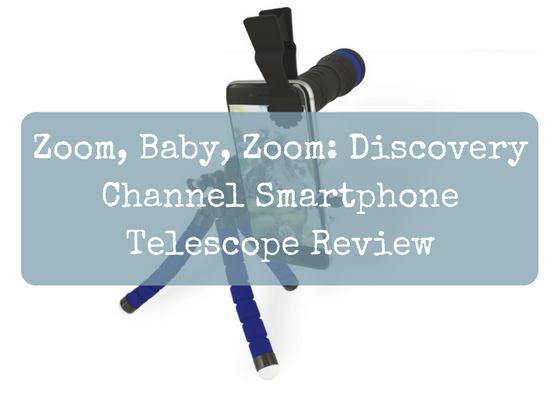 When you’re out and about taking snaps on your camera phone do you ever wish the zoom was a bit more, um, zoomy?

Most of the time when you spot something interesting in the distance by the time you’ve cranked up the digital zoom you’re left with a grainy picture of something vaguely similar to the lovely object you wanted to photograph! The end result being that when you look back at your masterpieces you tend to be a little underwhelmed.

The obvious solution of course is to stop taking photos on your phone and invest in a decent camera with proper optical zoom. But unless you’re REALLY into photography you might be reluctant to splash out on £100s of camera and / or have to cart it around with you and risk getting aforementioned flashy camera damaged or lost!

With Christmas fast approaching there is a fun solution that doesn’t cost an arm and a leg. It doesn’t even cost a finger and a toe!

We were sent a Discovery Channel Smartphone Telescope to give a once over by our friends at Paladone. It comes in a box, much like this one:

Inside the box you will find a zoomy lens thingy, a bendy legged tripod thingy and a phone holder thingy. You won’t find any instructions though for some reason but it’s not exactly rocket science to figure out how it all clips together.

I would have taken a photo of what my phone looks like with the various bits and bobs attached to it, but, um, it’s a bit hard to photograph your phone WITH your phone. So you’ll have to look at the lovely stock image below and visualise a knackered S7 with a cracked screen! 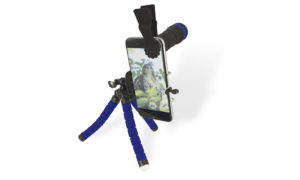 Basically the zoom lens clips on to your phone pretty easily in front of the lens part. You’ll know when it’s lined up OK because you’ll be able to see an image through it when in camera mode. The box shows a full screen image but in reality you get a circular image so you’re need to edit it a bit to make it look ‘normal’ afterwards.

To get the image in focus you just rotate the blue band until you see what you are happy with. To prevent hand wobbles ruining your shot you really need to use the included tripod or you get a rather blurry image.

I could pretend that it was a life long goal of mine to photograph Mr Potato Head from 6 metres away but, in reality, he was just there in the right place at the right time. He didn’t seem to mind either way.

Below you will see what Mr P looked like with my phone’s digital zoom from 6 metres: 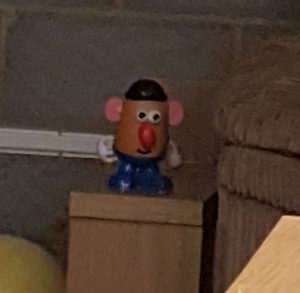 Pretty gash really. And here’s what he looked like with the Discovery Smartphone Telescope clipped to my phone: 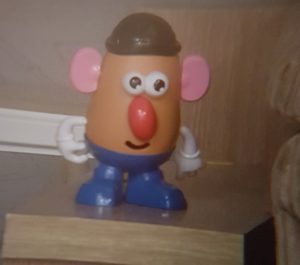 As you can hopefully see, it’s a lot more impressive. If I was devoid of basic grammatical ability I would declare that the second image is just much more betterer.

‘So how much will this pinnacle of zoomy, zoomy zoominess set me back?’, I hear you ask. Well, the Discovery Channel Smartphone Telescope is available from Paladone for just £19.99. For that price it’s a pretty cool gift for friends or family, especially as you get a decent little tripod in the box too!