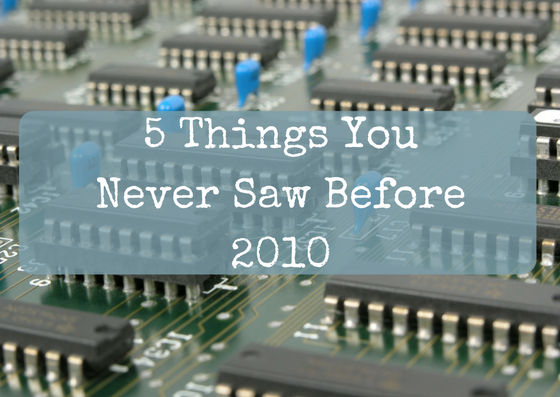 
Every decade brings with it a whole raft of new and exciting things that would seem a little odd to people that have managed to time travel themselves forward a few years! Here are a few of those things that didn’t appear to exist a few years ago but now everyone is doing!

1. Blogging About The Tough Side Of Parenting

Yes, blogging has been around for a good few years, but until pretty recently everything you read about parenting was about how awesome it was! Arts and crafts, days out, happy, smiling, disaster-free lives of perfect children and their perfect parents showing the world how perfect they are!

These days it’s all about the reality. Effectively, unless your small person is a poonami producing, non-sleeping nightmare and you are hitting the bottle bang on 7pm in order to cope no one wants to know!

Admittedly in the 90s we had some classic fake news programmes, like Brass Eye. Generally though, prior to 2010 if you were watching or reading fake news you generally knew you were doing it!

So far in this decade it’s almost impossible to tell if what you are reading or watching is actually true or not! Wikipedia is full of ‘comedians’ putting amusing updates for a laugh. More people are reading sites like The Daily Mash on a daily basis than they are actual news sites! The internet as a whole is full of made up crap. Even proper news on proper TV channels is a bit dubious!

Taking everything with a large pinch of salt is pretty much where we are now! If you do enjoy fake news, we have loads here, by the way!!

Clouds of tar and nicotine smelling cigarette smoke of years gone by have been replaced with rather more pleasant smelling and significantly less deadly vape smoke!

It’s definitely a big improvement on the accrid stench that lingered on your clothes for hours after visiting a pub in my youth before smoking was forced underground in the 00s! Now vape shops have popped up on every street in the 10s and become really rather fashionable all of a sudden – who’d have predicted that in the last decade?!

4. Everything In The World At The Touch Of A Button!

We all know that the internet has grown massively over the past 10 years, but it’s easy to forget that there was a time in the 90s when you actually had to leave your house to buy things. Imagine that!!

If you wanted to place a bet in the 80s and 90s you would have to wander into a stinky branch of Ladbrokes, frequented by middle aged men and alcoholics. In the 00s you could wander into a branch of about 20 different bookmakers on the high street. Now in the 10s you can just sit on your sofa at home and bet on pretty much whatever you want from any event in the entire world.


In the 80s if you wanted to watch some cartoons to entertain your small person you would have to turn on ITV or BBC at the correct time of day and watch Scooby Doo. In the 00s CBeebies was launched and you could watch a half decent selection of cartoons throughout the day. In the 10s we now have just under a billion kids’ TV channels – and if that isn’t enough you can watch pretty much anything ever made on Netflix. Of course, we now also have Maddie Moate.

Although a fair few decent phones had cameras on them in the 00s, this decade has really seen the concept of camera phones explode! It’s almost impossible to imagine a time when you didn’t automatically whip out your phone to take a photo of every tiny thing that your little one was doing and then share it instantly on social media. Think back to the days when you took a photo, didn’t really have a clue what it was going to look like, took it to the chemist when the roll was finished and then collected 24 botched images with stickers on half of them telling you what a terrible job you had done!

I recently transferred 12,000 images from my laptop to my new external hard drive, which is the equivalent of 500 rolls of 24 exposure film, which would have cost around £2,500 to have developed back in the day! Bizarre! Admittedly it probably made people a bit more selective as to what photos they actually took back in the 80s and 90s, but I’m sure our little one will be thrilled to look back at 10,000 photos of himself when he’s older!

What other things have you noticed in the past 7 years that have taken you by surprise?!