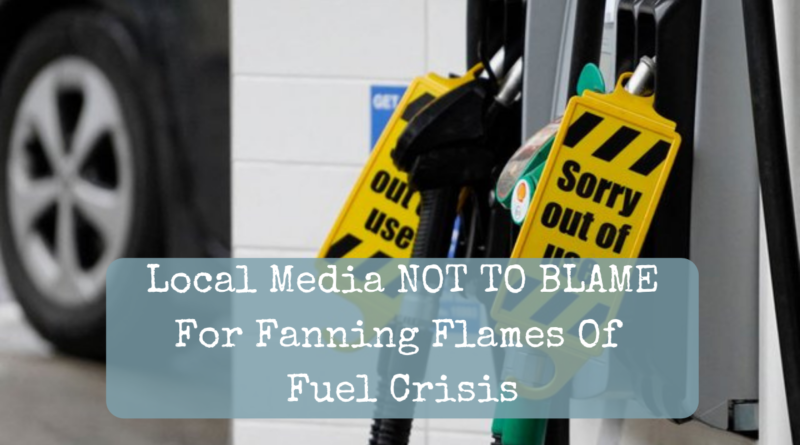 In my years on the front line of cutting edge local media, NEVER BEFORE have my hard-working colleagues and I been ACCUSED of contributing to a national crisis. Until now.

With the CATASTROPHIC national fuel crisis still being felt by hard-working families across Twatsville some IDIOTS have starting pointing the BLAME at the impartial, objective and noble people’s champions of our local media outlets such as The Twatsville Times and our sister site, Twatsville Today.

I’ve heard BONE-CHILLING accusations that we have been FANNING THE FLAMES of the crisis, by whipping intelligent, decent people like you into a FRENZY of fuel-focused FURY!

However, I can assure you that when I reported last week that the BP petrol station on Toss Corner had been forced to CLOSE amidst scenes of PANIC and FEAR never seen before in Twatsville, I was unaware that it had simply closed for the evening in line with its normal opening hours.

Also, I can CATEGORICALLY DENY that I was trying to get more page views when I reported that the Shell petrol station on the Bell End Bypass was suffering from WHOLESALE STOCK SHORTAGES. On reflection I could PERHAPS have specified that it was only SALTED PEANUTS that had sold out but I maintain that there were indeed WHOLESALE STOCK SHORTAGES (albeit only of salted peanuts).

Similarly, when I published a GROUNDBREAKING EXPOSE into the fact that a STAGGERING one in two pumps were closed at the Texaco petrol station on Cockwomble Common I could admittedly have explained that half of the petrol station had been closed for refurbishment over the past couple of months, which was impacting on the number of pumps that could be accessed.

Again, when I reported that the BP petrol station at the junction of Absolute Weapon Way and Complete Danger Drive was REFUSING entry to ANGRY motorists I should perhaps have clarified that this petrol station had closed down in 1997 and was now a branch of Costa Coffee.

Furthermore, when I penned the witty headline, ‘Panic at the ESSO‘, an homage to the popular music hit ‘Panic at the Disco’ I should, on reflection, have mentioned that the ‘panic’ was more a ‘mild inconvenience’, caused by partially deflated tyre on a Ford Focus. Additionally, the petrol station concerned was actually a Shell.

Finally, when I reported that the ESSO petrol station on Juan Kerr Way had been FORCED to call out the EMERGENCY SERVICES in the face of impending DOOM and DISASTER, I should perhaps have clarified that they had in fact only called out the Police because someone had stolen a bag of Maltesers and a packet of Wine Gums.

I am ABSOLUTELY DISGUSTED that the my good name has been called into question over this WORLDWIDE GLOBAL MEGA-DISASTER THE LIKES OF WHICH HAVE NOT BEEN SEEN SINCE WWII, and want to reassure readers that my balanced reporting has not contributed at all to what many people have described as A FATE WORSE THAN A THOUSAND DEATHS.

As a respected local journalist I feel that I must now do my bit, accept my calling, hold aloft the CHALICE of LOGIC and attempt to bring some stability back to Twatsville by reassuring you all that everything will be OK and that you don’t need to panic buy fuel.

Having said that, I did see a Shell tanker leaving a petrol station yesterday with NO FUEL LEFT IN IT, so if you do happen to be passing any of our local petrol stations today it might be worth popping in with EVERY RECEPTACLE YOU HAVE THAT IS CAPABLE OF HOLDING LIQUID.

Next up – Christmas is effectively RUINED for LITERALLY EVERYONE after FATHER CHRISTMAS himself says we’re all BUGGERED.