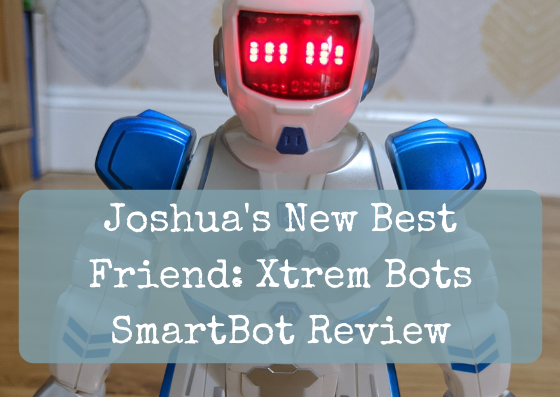 Joshua has always been a fan of robots over the years. They do what he tells them to do, they never sleep, and they never moan at him for eating too many snacks or tell him he needs to go to the toilet when he doesn’t want to.

Overall, robots are much less annoying than his parents, so Joshua was very keen to try out the pretty awesome looking Xtrem Bots SmartBot when it arrived through the post!

First up, the Xtrem Bots SmartBot looks just like you would expect a robot to look. Kind of a metallic human, with flashing lights and a bit of a too-cool-for-school attitude to life. Perfect.

It comes with its very own remote control and once you’ve popped in a couple of batteries it’s really easy to get going with it. On the left direction pad you can make your SmartBot glide around on its wheels. On the right direction pad you can make him walk instead. There’s two speeds you can set depending how quickly you want him to get about the place, but in terms of movement that’s the basics sorted.

The SmartBot charges through the included USB cable and measures just under 30cm, so is small but perfectly formed.

Aside from the basic direction pads, there are a smattering of other buttons that make your SmartBot do fun things. Pressing the dance button, for example, sets him off into a dance routine accompanied by a bit of music. If your child enjoys dancing as much as Joshua does then you’ll probably find them joining in pretty quickly!

Finally, and possibly the most interesting / educational part of the whole SmartBot is the ability to program him. Just press the program button and you can then set a sequence of up to 50 actions for your SmartBot to remember and perform. Pretty cool!

You can also control your SmartBot with your hand, away from the comfort of the remote control. By using gestures you can make your robot go backwards and forwards and turn from side to side. It takes a little bit of getting used to but again it’s a pretty cool feature.

And that’s it really. It does exactly what you’d hope a robot toy would do and it’s really easy to get started and really easy to control. Joshua was instantly taken with his SmartBot and played with it solidly for hours. He now wants one for Christmas, which is handy…

The Xtrem Bots SmartBot comes in under the £30 mark which I think is pretty good value for what it can do. It’s available from major retailers such as Smyths or Amazon (affiliate link below).