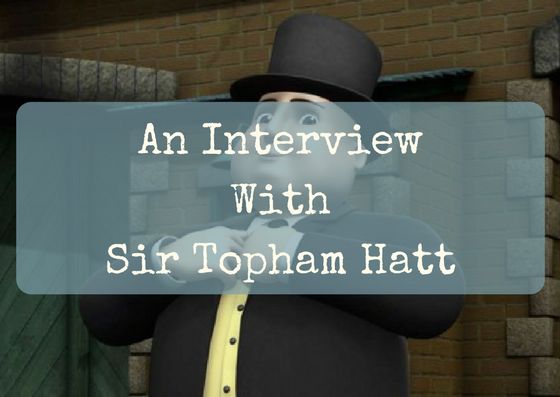 We meet at the Reform Club, Sir Topham-flanked by Aryan-looking security guards in impeccable Air Force blue uniforms-enters with a flourish, raising his top hat and tossing his cane into the arms of a waiting flunky at the door.

“I do hope you haven’t been waiting long,” he says with a wry smile as he slides his rotund frame into one of the plush leather booths, clicking his fingers to summon a waiter.

Sir Topham nods, and seconds later a tumbler of whisky arrives, on the rocks. He picks it up, takes a swig and sets it down again, looking me straight in the eye with that trademark steely glare.

“I suppose you want to know about the trains.”

It is a statement, not a question; one he has been asked many times before. Why does the Isle of Sodor keep running steam trains, resisting the tide of modernity, while the Evening Star puffed off the mainland and into the great big railway in the sky thousands of years ago?

I nod my head, and ask if it is OK to switch on my tape recorder. He smiles.

“I’m surprised you journalists are still using those things. Don’t you all have smartphones these days? Or a chip implanted in the back of your eye? What is it they call it, Google Glass or something?” He pauses, laughs at his own joke, and then adds, “whatever happened to Google Glass anyway?” It’s all an act, the faux-luddite stance, the pretence at not understanding modern technology. He knows exactly what he’s talking about; a modern man in antiquated clothing. He’s nobody’s fool.

“You don’t run an entire island’s railway network for three generations without a bit of nous.” He taps his forehead to show that I shouldn’t underestimate him.

I ask about Thomas.
“He’s very well, thank you.” He sighs. “No, Ringo is not still doing the voice. He wanted more money but…” he trails off, waving his hand as if swatting a fly. “Well, I said Ringo what are you doing these days anyway? Singing with the Bootleg Beatles? We had to find someone else who sounds just like him. Times move on, it seems.” He chuckles; a hearty, throaty laugh, the legacy of years of pipe smoking. He’s given up now, he tells me. The doctors were worried about his heart. He taps his rounded midsection. “High blood pressure,” he adds. “Had to give up bacon too. I miss a full English, but what can you do? At least I’ve still got whisky and a good bit of British beef and Sodor pudding on Sundays. Have you ever tried Sodor pudding?”

I shake my head. Sir Topham leans in, and lowers his voice to a whisper. “The folk in Yorkshire think they got there first,” he informs me, “but it’s really Sodor pudding, you know. Invented by the Earl of Sodor himself in 1682.”

I nod silently, unsure what to make of this unlikely revelation. It’s Sir Topham to a tee, a Sodor man born and bred, and proud of the island and its history. He talks about the Earl of Sodor and his new museum, about the history of the island, about the docks-some of the last heavy industry in the UK, he reminds me, untouched by “that woman.”

I ask if he means Thatcher.

“Yes Thatcher. It’s such a shame. Denis and my father were great friends. The Thatchers visited Sodor a few times, but they had very different views on things.”

I ask what sort of things.

“Well, she didn’t like the Docks. Wondered why we were still bothering with all that coal. Said Britain would be better under nuclear. My father, he was no Arthur Scargill but he understood the working man.”

It’s clear that Sir Topham sees himself as the defender of an old Britain, a Britain untroubled by political correctness or modern sensibilities. I ask what he thought about the recent EU referendum. There were rumours that he was advising the Leave campaign, that Boris Johnson and Michael Gove had sought his advice on the economy and creating what the press termed, a “better Britain, with British values.” Sir Topham sips his whisky and smiles. He couldn’t possibly comment on the current government, he says, or the previous one, but it’s clear that he is not disappointed with the way things turned out. He’ll say one thing, he adds, his voice becoming suddenly serious. It wasn’t him that was responsible for “that nonsense about the money going to the NHS.”

He wants us to get back to discussing the trains. It’s clear that they are his pride and joy. Is it true that he has a new fleet arriving for a future episode, I ask. His face crinkles into a wide smile.

“Ah, so you have heard about the Great Race? Thomas will be representing Sodor. I have trains coming from all over the world; India, Australia, North America, Russia…”

I ask whether any of those countries are still running steam trains.

Sir Topham’s shiny round head starts to glow a fiery red, so much so that I fleetingly wonder whether he is going to melt. “Ashima is not a show train,” is the response, “and nor is Thomas. Ashima runs on a mountain railway in India. And Thomas is active on Sodor, as you know.”

So the others are all show trains? Sir Topham waves his hand dismissively. It’s a gesture he repeats several times during our meeting, when something is not to his liking. He couldn’t possibly comment on the rail networks of other nations, he says. His focus is on Sodor. He changes the subject, and starts talking about James. He’s due a new coat of paint, apparently, and being very vain about the shade of red. “Never satisfied, that one.” I wonder about the Hatt family. Are they supportive of his continued desire to keep opening new branch lines? What does he think about HS2?

I ask what she does all day. She lunches with friends at the Sodor Ivy, apparently, and takes tennis lessons on the mainland twice a week. Spencer is her favourite of the engines (“very fast”) and Gordon is also a favourite (“he might be a bit on the pompous side, but he’s been pulling that express non stop since 1922.”)

What about Emily? I ask. She’s been branded a “token woman,” a female train for the sake of political correctness. I wonder if there is any truth in that. Sir Topham is not known for being a moderniser, and last year the Isle of Sodor was ranked 135th in the world for gender equality, one place below Saudi Arabia.

“She likes Emily too.”

It’s clear that that line of enquiry is closed.

There are other rumours about Sodor, and about Sir Topham’s place in it, too. Rumours that he rules Sodor as if it were his own private fiefdom; that he routinely blocks the building of new infrastructure where the plans include roads rather than rail; even that he occasionally puts the trains themselves in charge of the running of the railway-and usually with disastrous effect. Gordon alone has had to be lifted sixteen times this year by Rocky following various derailments-a result, no doubt, of the ineptitude of fellow engines being less than Really Useful. And then there are the persistent rumours that won’t go away-rumours of a scrapyard where old trains are sent when they are no longer Really Useful. One source-who spoke on condition of anonymity-pointed out that nobody appears to be able to tell what happened to Duck.

So what’s next for Sodor, I ask, can it continue as it is into the twenty-first century, or are there plans to modernise, or perhaps an intervention from Brussels before it’s too late and Sodor petitions for complete independence? I think I know where Sir Topham-the Fat Controller himself-stands, but will the public be behind him? Or will they shun his vision of olde worlde values and head instead to Chuggington, for cleaner air and a faceless leader that shouts commands through a speaker system? Children of Britain, make your choice, but Sir Topham, I’m sure, will find a way to continue his Really Useful reign.

This post was first published here. For more from Single Mum Speaks, click here or check out some of the recent posts below!

3 thoughts on “An Interview With Sir Topham Hatt”