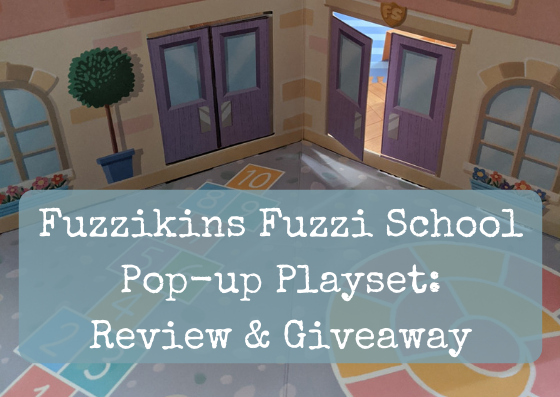 We first saw some Fuzzikins in action earlier this year at Beale Park when Interplay had a few different sets on display for children to colour in and play with.

Joshua was a massive fan instantly, so when we were given the chance to review the really rather awesome Fuzzikins Fuzzi School Pop-up Playset there was no hesitation!

In case you’ve been living under a rock over the past year, Fuzzikins are cute little creatures that you can colour in with pens and then pop in some warm water to return them back to their original state.

The Fuzzikins have various scenarios that they feature in, including a pizzeria, campervan and cottage and each one can be customised with stickers and coloured in using the pens provided.

But this review is about the Fuzzikins Fuzzi School…

The set comes with the pop-up school scene which quickly assembles itself by opening the enclosed book and is then fastened together using the fencing and school bell.

You also get four Fuzzikins students included, along with a wise owl teacher and some sets of stickers and colouring pens.

There are 3 sections of the school scene (canteen, classroom and playground) in which you can place your characters and each one has some lovely details which Joshua enjoyed.

The characters are simple to colour in with the supplied pens and given they are washable it’s nice and easy to start all over again another day by washing the characters in warm water.

I really like Fuzzikins because it gives Joshua a chance to show his creative, imaginative side and it’s one thing that he really concentrates on when he gets into it. This set it really easy to put together and has enough little details to keep any child entertained for a good few hours.

The Fuzzikins Fuzzi School set is designed for ages 4+ and is available from all major retailers including Argos and Amazon (affiliate link below) for around the £25 mark.

For more awesome reviews and giveaways pop along to our reviews section.