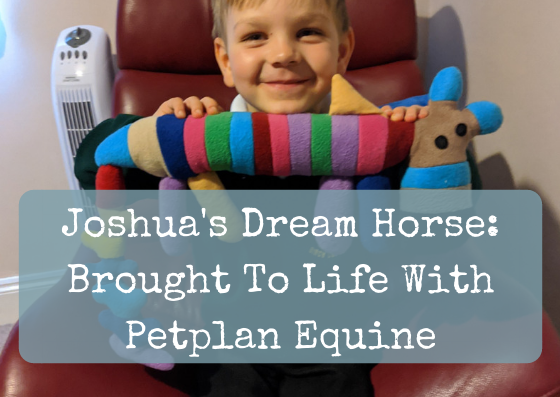 This post is in association with Petplan Equine, but all thoughts are my own.

Joshua loves animals of all shapes and sizes. He also loves soft toys and has an impressive collection that live in his bedroom. It’s a surprise that Joshua even fits in his bed each night, given the menagerie of soft and furry wild animals that rest within!

So when Petplan Equine offered us the chance for Joshua to create his own dream horse which would then be made into a soft toy we were genuinely quite excited.

Joshua quickly set to work on creating his horsey masterpiece through the medium of paper and felt pen.

And after a few attempts he came up with one that looked quite a bit like a horse, albeit an exceptionally colourful one with a giant rainbow tail!

Magical, multicoloured dream horse complete, the picture went off to be crafted into a soft toy, the likes of which has never been seen before.

Today that epic and elegant equine snapshot into the somewhat random mind of a five year-old boy arrived. And what a magical creature it was…

Joshua was overjoyed when he came home from school and the horse, which has been very appropriately named ‘Rainbow Horsey‘, now has pride of place next to his pillow!

Rainbow Horsey also had a good tour of the house this afternoon, including looking out at the bushes outside and imagining running free through the fields.

Joshua has also been getting very excited by the idea of having a pet of his own lately, having spent an afternoon playing with a puppy at a friend’s house recently. Now, I think the likelihood is that this desire for a pet will manifest itself in a goldfish, or maybe even a hamster rather than an actual horse!

But for those of you that do have actual real-life, non-rainbow coloured horses of your very own it’s worth looking at horse insurance from Petplan Equine. They offer lifetime and 12-month cover for your horse friends and since 1994 have also raised over £7,000,000 for animal health and welfare through their Petplan Charitable Trust.

But for us, we now have a horse of our very own that Joshua loves, and which requires minimal care, no stabling and absolutely no food. It may be rather brightly coloured, and have a tail that is twice the height of its body but Joshua is a massive fan…and so are we!