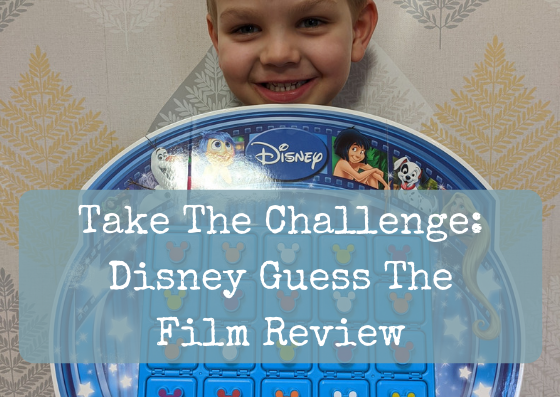 Enjoying Disney films is pretty much a given for the vast majority of the population, whether they are children or adults. I grew up with some absolute classic Disney kids movies, such as Bambi, Dumbo and Snow White – films that will always stay in the memory and bring back the feelings and emotions of when I first watched them.

These days, of course, films are a lot more advanced in terms of technology with children today expecting all the magic of the classic Disney films but with amazing special effects, stunning graphics and CGI wonders that could only have been imagined when I was little!

Joshua loves watching films on our projector and a few of those are modern-day Disney classics, such as Cars, Toy Story and Monsters Inc. So when we were offered the chance to review the Disney Guess The Film game from Jumbo Games, I knew he’d love to put his Disney film knowledge to the test.

The game itself is very much tailored to make it as easy as possible for kids to get involved and to be able to challenge themselves against friends or family members.

Once the movie screen is quickly slotted together, you’re pretty much ready to go. All that’s left is to shuffle the various film sheets and place them in the slot at the rear of the movie screen. The sheets come in 3 different difficulty levels so you can choose to exclude the harder-to-spot kids movies if you wish, but we found it fine to keep all of the sheets in play.

The first player then rolls the dice and depending on the colour rolled they open one of the windows of the same colour on the screen, revealing a small part of the film image. If they think they know the film from the segment of the image they can guess, and if they are correct they win a Mickey token. If they choose to guess and they get it wrong they’re out of that round.

The next player then rolls the dice and again opens a window to reveal more of the image. Whoever guesses the image first wins a Mickey token, and the player to reach 4 tokens first is the winner.

It’s a really simple concept but one that is immediately very easy to get into, assuming you have at least a little bit of knowledge of some of the wonderful Disney kids movies from across the decades! We found that even the films that Joshua had never actually watched before he was still able to identify from adverts, toys and other programmes he had seen over the years, so he actually did a lot better than we expected him to!

The Disney Guess The Film game is available in all major retailers for around the £20 mark, including at Amazon (affiliate link below).

I’d definitely recommend it for children of all ages as it really is that simple to get to grips with, with very easy rules, no fiddly pieces and a subject the everyone will know at least a bit about. Great for parties and family gatherings this Christmas.