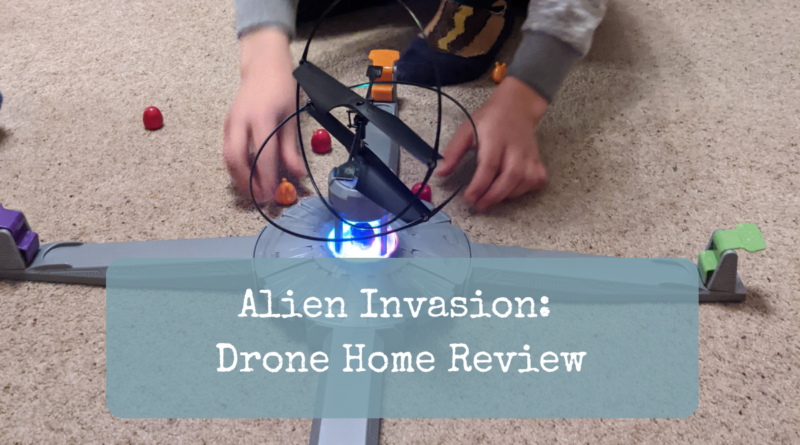 With Christmas rapidly approaching and only a few days left of the Autumn school term, most parents will soon be reaching for the games cupboard to help keep their little ones entertained over the festive period.

Every year we like to try out something a bit different, ideally games that are either interactive or where something fun happens. Last year we tried out Orangutwang and this year it’s the turn of the space age, alien-filled, dronetastic Drone Home from Interplay.

I first saw Drone Home at the BlogOn Toy Awards earlier this year and it looked very different to most of the other board games on show. Not least because it had an actual flying drone!

The actual set up to the game is really straightforward. Just clip the four launch ramps onto the launch pad, add 4 AAA batteries and charge up your drone with the supplied USB cable and you’re ready for action!

Charging the drone takes about ten minutes and that should last long enough for a few games before you need to charge again.

Players then choose their alien colour, place their 3 aliens near the end of their launch ramps and get ready to commence battle.

The object of the game is to successfully launch all 3 of your aliens into space, via the drone. Players launch their aliens along their launch ramp using the launch lever in an attempt to get them to land inside the drone. It can get quite frantic as each player rapidly tries to fire their aliens towards the drone before their opponents’ aliens make it inside!

Once an alien manages to land inside the drone, the fun really begins! The launch lights flash, the rotors kick into life and the drone takes off into the sky in suitably dramatic fashion. Here it is in action…

Even if your opponent’s alien had made is safely into the drone you can still attempt to knock it back out with your own alien before it takes off. You can also try to hitch a ride, as every alien inside the drone when it takes off counts as a successful launch.

Out of all the games we’ve played over the years, watching the drone take off after some frantic hammering of launch levers is genuinely one of the highlights!

The winner is the first player to launch all 3 of their aliens into space. Sounds easy but it’s anything but!

The game is a lot of fun, and every time we’ve played it there has been laughter, shouting and excitement pretty much throughout. It’s something a bit different and is very much suitable for all age ranges.

We loved the game and played it a lot and would recommend it to pretty much anyone as a simple, frantic, fun game. However, there are a couple of downsides. The drone needs charging quite frequently – you’ll be mid game and suddenly the drone will refuse to take off, which is a pain. All it takes is a quick ten minutes on USB charge, but it does get in the way a bit.

The other issue, similar to any small drone-based toys is that they tend to come back down to earth with a bang! The instructions suggest that you should catch it safely once it takes off rather than let it fly randomly around the room.

This is definitely advisable because if and when it does hit the deck the rotor blades can break, especially if they crash into a solid floor or hard surface or corner a few times. They can be glued or taped, but it’s definitely best to catch it before it crashes back to earth – assuming you’re quick enough and have the required coordination to do so!

Those small details aside, the game is really good fun. It’s aimed at ages 6+ and currently retails for around the £20 mark at all major retailers, including Amazon (affiliate link). It could be just what your Christmas needs!

For more reviews check out our reviews page!