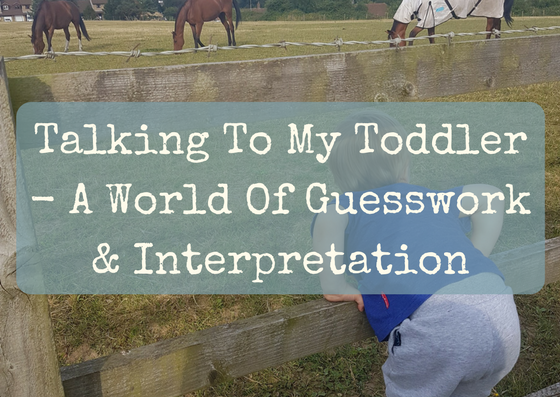 Communication is an amazing thing. Nowhere is this more apparent than when watching your little person developing from having no vocabulary at all at birth to being able to have a chat with you at aged 2! Whilst we have helped him learn new words as best we could the real magic is the fact that he has just picked most of it up by himself. Not only learning the basic words, but somehow learning how they fit together, what they all mean and how to use them most effectively to get what he wants! It somehow just happened.

As a parent, being able to communicate with your small person is amazing. It eliminates most of the guesswork that was faced during their first year or so. Instead of just wailing when they want something they can generally express what it is that they actually want – the thing that will stop the wailing! It’s a game changer.

However, despite his ever-increasing grasp of the English language there are still a few things that it would be lovely if he could express a bit better. The ability to explain why he wants or doesn’t want something rather than just stating that he does or doesn’t want it! Or providing a few more details regarding something he has done rather than just stating he’s done it! That’s the next golden ticket that I’m hoping will arrive soon. Here are some examples:

‘Daddy I not want to have a bath. I not like baths’

In your own mind you know he loves baths. He loves swimming, puddles, rain – everything related to water! He loved baths last week, so why does he now hate them?! You ask why he doesn’t want a bath but he only reveals – repeatedly – that he doesn’t like them. After a couple of weeks you finally figure out that he had found a hair in the bath on one occasion and therefore he no longer wished to be placed in that horrific situation again! Clearly he knew why he no longer liked baths but didn’t feel the need / inclination to tell me!

‘Daddy I’ve put out the fire’

You can’t remember smelling smoke in the house. You have no recollection of leaving anything turned on that may have caught alight. Little one isn’t carrying his fire engine. Or his Marshall toy from Paw Patrol. So where was the alleged fire – and more importantly what did he use to extinguish it?! Some time later you notice his socks are damp and that there is a smell of furniture polish in the air! On entering the spare bedroom you discover that the ‘fire’ was just a random flame-free patch of carpet and that it had been rather excessively extinguished with a spray can of polish. As had the bedding and newly washed work clothes. Good work son.

‘I was putting out a fire’.
With Pledge. All over the floor – & the clean washing on the bed – & his clothes. Good work son. #100crappydays pic.twitter.com/GQzl5rM90G

‘Daddy I not want to go to the shop’

Interesting. You know he enjoys going to the shops. You also know he wanted to go to the shops just 30 minutes previous. Nothing has changed in the interim. Apart from his desire, or lack thereof, for shop-based attendance of course. You ask why he doesn’t want to go to the shops, but you get nothing. Then you notice he has only completed two out of the four Paw Patrol puzzles that are strewn across the living room floor. What he actually more accurately meant was:

‘Daddy, would you be kind enough to delay our trip to the shops by ten minutes so I can finish my Marshall and Chase puzzles for the one millionth time today? I really would love to come with you but I feel it would be remiss of me to leave the job of puzzle completion only part-finished.’

Although, to be fair, if he came out with that I’d probably be even more concerned!

Sounds thrilling. What enjoyable game could he be wanting to play with me, you ponder. So you slowly drag yourself up from the sofa, barely able to see through your eyes that have only ‘enjoyed’ 4 hours of sleep the night before. You ease yourself down onto the ‘mat’ (actually one of those city layout things with roads) and nothing happens. He has no interest in you being there – he just doesn’t want you to be on the comfy sofa. In fact the only time he does want you to be on the mat is the few moments directly following any attempt for you to return to the sofa!

‘Daddy, I not like my (insert any given dinner combination)’

Little one generally enjoys his dinner. So does he genuinely mean he no longer likes pasta / fish/ meat / rice / vegetables? Does everything you have in your fridge or cupboard need to be thrown away?

Of course not! What he actually means is:

‘Although I’m actually enjoying my dinner I’d much rather have some cheese / chocolate / cake / biscuit!’

I know that feeling, son. It never leaves you…

So there you have it. A few more months of interpretation and guesswork ahead but still a breeze compared to trying to work out what a baby wants! I’ll take my chatty, slightly confusing toddler any day!

For more from A Life Just Ordinary click here or visit one of the recent posts below!

7 thoughts on “Talking To My Toddler – A World Of Guesswork And Interpretation!”