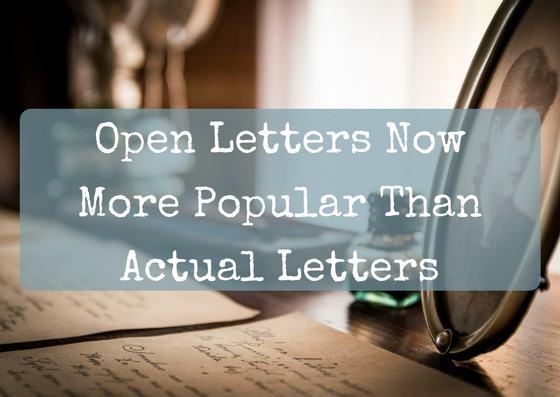 Shocking results from a recent survey of 18-40 year olds revealed that just 1% of the UK population now write letters addressed to actual people. Reasons given for the decline in popularity included:

Emails have also taken a hit, with 12% fewer people now taking the time to write something longer than 140 characters of self-promotional twaddle than 5 years ago.

‘It’s an interesting development’, lead researcher Faye Kerr explained. ‘In the past, people would write letters because they wanted to share news and say nice things to each other without everyone else knowing about it. People still write letters now but instead of sending them to the person they are writing to they send them to as many strangers as possible except the person they’re actually writing to. It’s a bit twattish really.’

We spoke to some regular writers of open letters to find out what possesses them to write to strangers with no hope of actually achieving anything productive.

Doug Hole, who has already penned open letters to his cat, someone who parked too close to his car at Asda, someone who looked at him a bit funny and the postman so far this week told us ‘I guess I could have just politely told the postman that I’d rather he didn’t whistle as he walked past my house but then the rest of Facebook would have been clueless as to the daily struggle I face.’

Unfortunately Doug’s postman isn’t on Facebook so he has yet to read his impassioned plea, but 4 strangers ‘liked’ Doug’s post and are now equally livid about the whole whistling ordeal.

‘Hopefully when the postman sees the weight of feeling about his whistling he will stop doing it. There’s no other way I can think of to get him to stop. Apart from physically speaking to him. Hopefully it won’t come to that.’

Unfortunately Penny was ‘too busy’ to talk to us in person, but has since received 2 shares, 1 ‘wow’ and a comment containing a single ‘turd’ emoji on her latest Facebook post titled ‘an open letter to the person who contacted me about my views on open letters’.