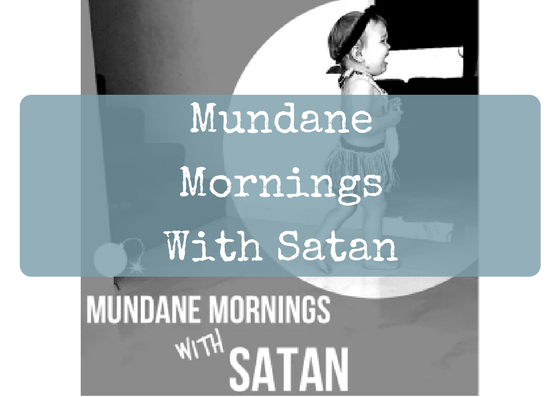 To catch you up to speed, we had a good breakfast, and then the torture started.

Lana is the menace of legend. Her tales of chaos creating and tantrum throwing is highly regarded amongst the #terribletoddler community. She looks at you with her clinquant blue eyes and your disapproval is ephemeral.

I received a lovely lavender soap package for my birthday, only after unwrapping it did I realise the ‘soaps’ were actually singular and were only the one. It couldn’t sit in the shower soap holder it was that large. I brought it downstairs and cut it into 3 soaps. I went to the toilet (alone, believe it or not!!) for no longer than a minute and returned to my gorgeous little Satan who was swinging her legs on the office chair devouring a good chunk of my new mini (normal sized) soaps.

And holy shit did her face screw up and turn red faster than snack food disappears at a weight watchers meeting when I took it off her. She threw herself to the floor, wailing her arms and legs around screaming ‘no’. She’s at the age where she can’t control her emotions (everything is hyper; hyper happy, hyper devastating etc) and doesn’t quite understand discipline.

I refused to give her back the soap and as a result, her mood became rather sour. I tried to build blocks with her and she got up and left. I attempted to play with her farm toys and she packed them away. I put music on so we could dance and she sat on the stairs with the most displeased expression refusing my friendship.

Lana got up and began banging on the fridge saying ‘more more’. I wanted to give her something she liked; in hopes, we could be friends again. So I made some porridge with a teaspoon of love. I asked her to climb up into her high chair and she didn’t want a bar of it. Not a bar. Queue tantrum number two. In short: she wanted the food but not in her high chair; mummy/ unpaid cleaning lady didn’t want her to wander around the house spilling porridge everywhere.

Who won? The battle was close. It was a war fought with assault tantrums and ultimatums. The onslaught of tears finally dried when I offered her a cuddle and to nibble porridge on the couch. We clapped after each mouthful and wiggled our bottoms to the music in the background.

After porridge was devoured my children decided to not follow the “one crying kid at a time” rule. They have an ongoing little competition of who can cry the loudest. Generally, Lana wins 9/10 but that doesn’t deter Mabel who consistently gives her all.

I successfully washed the dishes without any little humans tugging my leg or demanding my boobie be whipped out. The house was quiet, touch wood. Mabel was happily jumping away in her jolly jumper and Lana was off venturing upstairs. Typically when there’s silence through my home it probably means someone is up to no good, and by someone, I’m not so subtly referring to Lana. I contemplated seeing what she was doing but my morning has been so long already I was willing to trade her destruction for an extra five minutes of peace.

It was a glorious five minutes too! I was able to pack the dishes away, scroll Instagram, and even make myself a cuppa before I heard a dreaded ‘uh-oh’ from above. I quickly snuck upstairs to catch Lana red handed in her dire and evil ways.

I was expecting a tornado to have gone through her bedroom, and I was right to assume as much. The tornado had gone through her entire wardrobe and pulled every item of clothing out. Fuck. Me.

I’m a firm believer in letting kids be kids, so I threw her a bone, sighed heavily, and walked out allowing Lana to return to demolishing whatever’s next on her list.

This post was originally published here. For more from Thorny Lullaby click here or check out some of the recent posts below.

One thought on “Mundane Mornings With Satan”