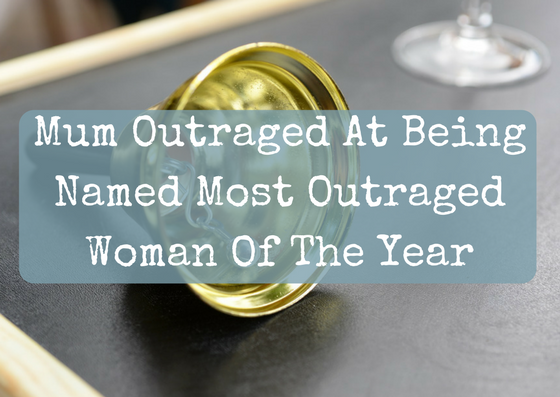 
A mum has taken to social media to express her outrage at being named Most Outraged Woman Of The Year.

Anne Green, 29, from Croydon, was given the award after voters discovered that she had been somewhere between being ‘miffed‘ and ‘apoplectic with rage‘ on no less that 37 occasions in June and July 2017 alone. Some of the catastrophic events that prompted Anne’s outbursts were:

* A parent expressing their concern on social media that another parent had told their kid to $#@! off in public

* Remembering that Snickers is no longer called Marathon

On discovery that she had been awarded the coveted title of most outraged female, Anne took to the forum at AngryBitchyMums.com and posted an entry titled, ‘An open letter to the thick cows who voted me most outraged woman’.

She went on to say that she will carry on saying ‘whatever the $#@! I want about whatever the $#!! I want’ and that if people don’t like it they can ‘do one‘.

We spoke to Dave Dave from the Institute of Anger Management who told us he feared for Anne and other easily outraged people like her.

‘These days some people get outraged by the most ridiculous of things. The condition, known as Twatitis is often coupled with acute feelings of self importance, manifesting itself in these angry muppets pouring out their rabid opinions on social media, completely oblivious to the fact that no one gives half a shit about what they think. It’s quite sad and it’s on the rise.’

Anne will be awarded her prize, a giant engraved bell, at a glittering awards ceremony. The event will be streamed live on Facebook.


For more fake news click on the words ‘fake news’ that you just scrolled past. Or here. Here’s fine too.