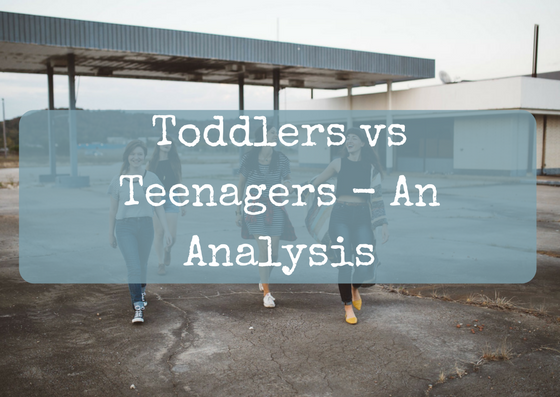 Looking after children of any age is, of course, super duper fun – but every age comes with its own unique challenges. As you may know, I have a toddler so I’m pretty well equipped to discuss their positives and negatives. What you may not know is that I also used to be a teenager – thus making me perfectly well equipped to compare and contrast the two groups, much like a pretty flippant, poorly-written degree level dissertation. Conveniently, I also have good experience of producing one of them. Anyway, let’s get to the analysing…

Impact on Tidiness Of House

Toddlers are generally not that concerned about leaving a house as they found it. In fact they are more concerned with finding everything they have ever owned and distributing it around every inch of floor space in your home. Like spreading the love, but with piles of noisy, plastic things. The speed of the destruction that toddlers can inflict is quite impressive, and you can rely on them to turn pretty much any location from pristine to bombsite within minutes.

Teenagers can have a similar impact on a home, but generally achieve their results in slower time, predominantly through apathy and a lack of willingness rather than a deliberate attempt to destroy. Teenager mess generally smells more than toddler mess, whereas toddler mess generally hurts more to stand on and makes a lot more random noises when you are least expecting it.

Result – Both equally messy, but over different time frames and with different impacts on the senses of the parents.

Toddlers blow through your money like there’s no tomorrow, especially for the large purchases like prams, cots, car seats etc. Then there’s the smaller but incredibly frequent expenses such as nappies, clothes and food. Oh and not forgetting toys – hundreds of pounds worth of plastic crap will adorn every inch of your home, like an explosion in a toy factory. However, given they have no concept of the value of money, they don’t generally ask to borrow any from you – because they know that if they whine enough about something you’ll probably go and buy it for them anyway, so the actual money itself is a bit of a non-event for them.

Teenagers are a different kettle of fish altogether. They completely understand the concept of money, even if they haven’t necessarily understood the concept of earning it for themselves yet! Even if they have managed to secure some form of paid employment, be it a paper round, or a Saturday job delivering impeccable customer service in McDonald’s, the likelihood is that they will still be looking for quick loans at least once a week to cover those ‘essential’ purchases. With these types of loans, the expectation of a return on your investment is likely to be limited. In fact a return of the money itself is also likely to be rare.

Impact on Your Sleep

I am less than useless before around 10am. I am at my best from around 8pm. Regrettably this pattern is not at all compatible with our toddler.

Teenagers, from what I remember, crawl out of bed when they feel like it, unless it’s a school day in which case they will crawl out of bed at the very last second possible. As a parent of a teenager the challenge is more around getting them out of bed to do something rather than trying to keep them in bed!

Result – If you like getting up pre-6am then toddlers are for you. If you like crawling out of bed when you feel like it, teenagers are your best option. Personally, I’m all about the lie ins, so for me I’d prefer a teenage sleep pattern.

Impact of Their Mood Swings on Your General Wellbeing

Our toddler has his fair share of moody moments since he turned three. I’m guessing he’s trying to find the boundaries and take ownership for his own destiny, but a lot of the time it just feels like he’s being a bit of an arse. He wants to do everything for himself, even the things he can’t physically do. He wants me to do everything he wants me to do, but only to the exact amount that he wants me to do it. Don’t do it enough? End of world. Do it too much? End of world. He is also constantly trying to engage me in conversation – which is generally lovely. It can be pretty stressful at times, and sometimes You Have To Laugh or you’ll go crazy! And yes, I just name checked the website.

Teenagers vary greatly from individual to individual, but some of them can be moody as hell. As opposed to the non-stop whirlwind, permanently talking toddler, teenagers can be incredibly hard to even get two words out of. I remember my mum always asking how I had got on at school that day, and I pretty much always just said ‘yeah it was OK’ before heading to my room to listen to Rage Against The Machine slightly too loudly for polite company and play video games. And I was one of the good ones!!

Result – If you like being constantly talked at, crawled over, demanded to do things and then told off for doing them, toddlers are for you. But if you prefer being ignored, grunted at and completely unappreciated you’ll probably prefer teenagers. I think I’ll miss our little one when he stops being so chatty, so for me I prefer the toddler stage!

So there we have it. A quick and dirty (not quite 20,000 words!) essay on the differences between toddlers and teenagers, which conclusively proves that both groups are bloody hard work. QED.

Which age range do you think you’ll prefer?!