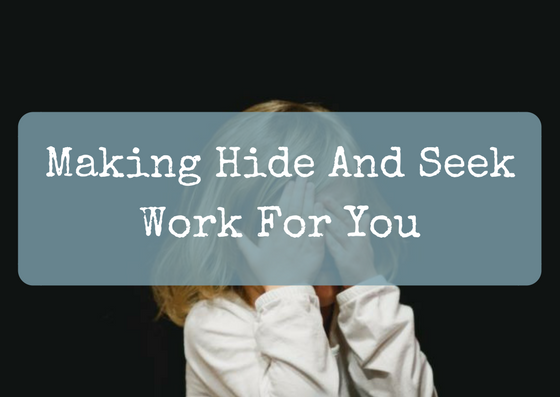 I am increasingly convinced that the inventor of Hide and Seek was an enterprising parent of small children. It is a game that is played in near silence, requires no mess to be created and most of all offers unique opportunities for respite from the habitual grind of childcare.

To maximise me-time the traditional wisdom states the parent should nominate themselves as the seeker and send their children out to source suitable hiding-places. This should allow them a short time at leisure, which in my case would involve just sitting and scratching.

But I have found that my sons don’t have the necessary patience. They deem it unnatural to remain in one place for any longer than a few seconds. Either that or they haven’t grasped the basics of the game because inevitably they’ve reported back to me before I’ve counted to ten.

Even if I go through the motions of looking for them, both boys are awful at hiding. Normally I’m presented with a pair of feet extending from under the coffee table or a sniggering bulge in the living room curtains.

I did hear of one child whose commitment to the game was so absolute he managed to stay hidden for an hour. He ignored his parents’ frantic pleas to turn himself in, presumably believing they were just a ruse to flush him out. Eventually, the couple came to the conclusion that he’d somehow escaped the house and was roaming the world at large. It was only once they’d called the police that he stepped out from a tiny space behind the television.

I believe that the best strategy is to hide. My hiding-place of choice is between the folded back halves of the duvet on our bed: making myself the filling in a sort of duvet calzone. The structure forms a cloud in which it is possible to secrete myself without any revealing dad-shaped lumps. It also provides a snuggly almost-foetal comfort, ample chances for scratching and perhaps even a snooze.

The position of our bedroom means that it’s possible to remove myself from the calzone and slip downstairs back to the spot where the boys set off from. There I can brew a pot of coffee, read the paper and pretend that my children’s frantic pleas are just a ruse to flush me out.

This post was first published here. For more from Bad Dadu click here, or there or everywhere. Please note: Not all posts are about hide and seek.