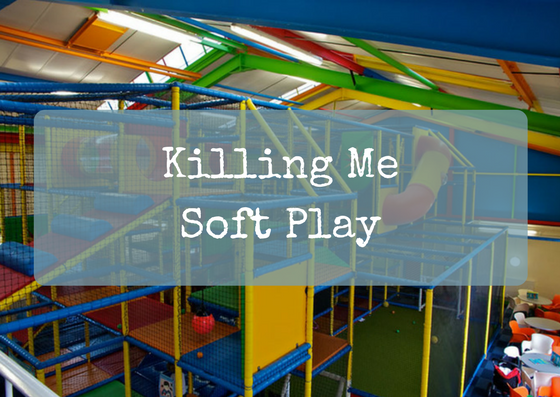 Good day to you all!

Today I release blog number 13 which is unlucky for you if you’re reading this and unlucky for me because you probably aren’t.

Those who have read my work (work?) will be aware that there is zero theme whatsoever. One week its musical and the next its about toilets. However a lot of blogs I’ve seen online revolve around people’s children and the joys (or not so joys) of being a parent. Not everyone’s cup of tea but if you don’t like them don’t read them. Simple.

For those unaware of what soft play is it’s basically a giant, padded cargo hold for kids. There are spinny bits, bouncy bits, climby bits, swingy bits and slidy bits.

And my recommendation to you, if you are a first timer, is to case the joint first (shoes off mind) because don’t be under any illusion that you can just drop little Timmy off at the entrance while you sit in the noisy, sticky floored cafe within drinking the closest thing to something like coffee and assume he’ll be fine in there because he won’t!

Little Timmy is in GRAVE DANGER!

Because, in a world where health and safety have slapped stripy yellow and black tape on everything from trikes to conkers (but not bouncy castles, how are they still allowed?) they have neglected to confront the terror within a place most probably called Cheeky Monkeys or maybe Pirate Pete’s Pissy Pants Play Area.

If you are lucky enough to discover one of these places while your child is at preschool age and you get in there early enough on a school day you’ll wonder what the hell I’m moaning about.

“Hamster” you’ll say, “What the hell are you moaning about? There’s only a handful of small children here having lots of gentle fun while the mothers have a bitch about every woman ever”

and you’d be right, for that is the best time to go. You can climb on in and have a whale of a time with your little one. It’ll be freshly cleaned, quiet, safe and fun. And I mean fun for you too because you can get properly involved.

Now fast forward to when you have a 4 or 5 year old. They’ve had a taste of the sticky treat that is soft play and they like it. But they’re at school age now. When are you gonna take them?? You can’t let them skip school because the Schoolboard are all over that sort of caper like a rash since that bloke took his kids to Disneyworld. And I’ll be honest the two venues don’t compare, it’s not worth going to court over.
The only time you can take them is the weekend or the school holidays and you know who else will be there then?
Every other bastard that’s who.
That soft, clean, gentle playground is now a multicoloured HELL because of other. peoples. kids.

I love my kids. They’re perfect. Everyone else’s kids are absolute little pricks. When I say EVERYONE’S kids I mean 99% of them. You reading this, I’m sure your kids are little angels (smoothly done).

The whole place has transformed now. Everything’s coated in snot and piss and Christ knows what else. Plus that massive slide you used to go down with Little Timmy on your lap? There’s now a backlog at the top because some little shits are climbing up the bottom of it (even though there’s clearly a sign telling you not to).

The padded spinning platforms little Tabatha likes to sit on and slowly rotate? That’s a no go area thanks to a bunch of 12 year olds doing 200rpm on it and launching themselves off headfirst into whoever gets in the way. The crash mats just outside the entrance to Satan’s play area? Cunningly kicked around so there are gaps between them perfectly sized that little Shanice can both trip over AND knock her head on the now exposed concrete floor.

I don’t know about you but I can’t handle the sound of a child upset because they’ve hurt themselves. Even if it is someone else’s little twat.

A tip for you: If your child gets invited to a birthday party in one of these places avoid it like the mafia. Due to cake and sweets they will be as high as a giraffe on speed and there will be injuries.

If said party is in a soft play in a pub then it’s goodnight from me. These are generally not as spacious as the dedicated arenas of dismay so if you, as a normal sized adult, have to venture in to fish out one of the fallen among a sea of pint size bellends then you’d just as well have Richard O’Brien stood outside counting down from ten because you my friend are locked in and no-one’s coming back with a crystal to buy you out.

It’s heaven and hell really. Mostly hell though. If I win the Lotto I’m building one for myself. I’m not even telling the kids, they can do one.

Are all the mums gone?

Good. To all the dad’s who hung around I’ve got one word for you: MILFs.

I’ll see you down there…

This post was first published here. For more from Hamster McKenzie click on the pretty image or recent posts below!