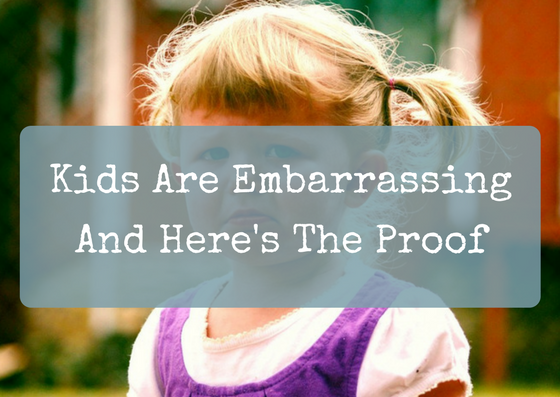 
The great thing about being a toddler is that you have no concept of shame.

The worst thing about being a parent to a toddler is that they have no concept of shame.

We asked some bloggers what their kids had done that had embarrassed them and basically learned that kids are awful and if you have them, you are going to spend a large proportion of time with your cheeks burning with shame.

We’ve picked out our top ten most embarrassing and downright cringe-worthy parenting moments:

10) E once shouted “Mummy, I have got your boobies!” And then grabbed them during a very quiet part of the church nativity… Danielle from Someone’s Mum

9) My (then) 4 year old opening the locked toilet cubicle door leaving me mid wee on display to the rather busy shopping centre toilets. Emma from They Grow So Quick

8) My daughter is forever asking me if I’m having a poo when I go in public toilets, but the other day in the middle of the doctors waiting room she said “don’t beat me up Mummy” whilst chuckling away to herself. Oh, and she went into nursery and told everyone “my daddy has a big willy!” Amy from The Smallest of Things

7) The most recent one was in a relatively posh restaurant. The room was pretty quiet and at the top or his voice he suddenly said “Mummy you just trumped’. He then proceeded to waft his hand in front of his nose. Needless to say I hadn’t trumped and wanted the ground to open up and swallow me. Suzy from Our Bucket List Lives

6) My daughter, aged four, at Disneyland Paris dressed as a beautiful princess, declared loudly to the surrounding crowds ‘mummy, my bum hurts because my knickers have gone inside it’. Classy kid. Kelly from Let’s Go Somewhere Nice

5) My little girl has two mums. Shouting “DADA!” at random men is not one of her finer habits… Especially when the man looks so awkward about it. Ooops! Laura from Mama, Eden and Me

4) I slipped over on my arse in the middle of an aisle in home bargains because my child was destroying the toilet roll tower and running off with them. I was in the queue and kept asking him to put them back but he just kept laughing at me and running off so I made the mistake of leaving the queue with my arms full of stuff and as I went to grab him I missed and flew over. Everyone around me just stood there and looked! I could feel my face going bright red and I had to get all this toilet roll back into place, grab my child and return to queue without losing my shit in front of everyone! Emma from Emma Reed

3) My son asked loudly ‘Mummy, why is that man so fat?’ when we were on the bus. What’s worse is that it was a large woman, not a man… Lucy from White and Green Beans

2) We were at a wedding with my then three year old daughter, they were a religious family and the groom included a prayer in his speech. We were sat in a huge marquee and everyone was silent, she took that moment to tell me very loudly ‘I need a poopoo’. I tried to explain  quietly that we would need to wait a few moments to leave, at which point she had a massive tantrum, stamped her feet and screamed ‘poo poo!‘…. I was mortified. Emily from A Slummy Mummy

1) A friend’s child spotted an elderly man wearing a medical type eye patch on a very busy bus. He climbed and being obsessed with pirates shouted ‘Look!! There’s a pirate on the bus! Shiver me timbers!’ Michelle from Seeing Rainbows

Thanks to all the bloggers who helped us out!

What is your most embarrassing parenting moment?