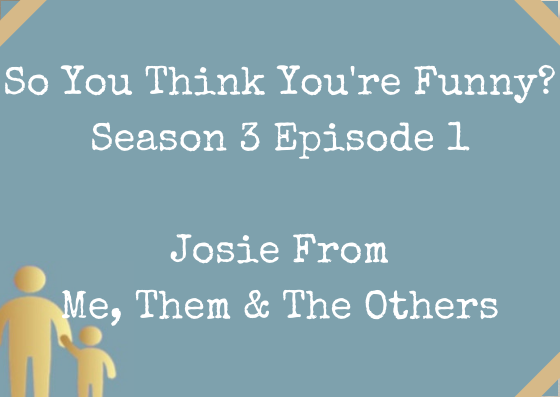 It’s with a tear in my eye and a serene smile on my face that I bring to you Season 3 of the popular blogger interview series, So You Think You’re Funny?

I remember back to when I launched this phenomenon. I was 37, had a full head of hair and the kind of twinkle in my eye that suggested I was really going places.

It was like I was setting this interview series off on a ship to a faraway land where fame, fortune and power were lying in wait ready for it to grab their loving hands and head off into the sunset.

Unfortunately that ship turned out to be the Titanic and So You Think You’re Funny? has been clinging to the side of a jagged sheet of metal in the frosty ocean ever since.

But against all the odds it has been SAVED from the ravages of the ocean and has made its way back to land on a leaky dinghy, ready for its star-studded relaunch. And what a relaunch it is.

There’s bells, whistles, pyrotechnics and a theme tune sung by the late great Elvis Presley. And most importantly there’s Josie from Me, Them & The Others. Oh look, here she is, and I can confirm she’s actually a real person as I’ve seen her in real life!

Behold the return of greatness. Breath it in. It smells AMAZING! Let the first ‘So You Think You’re Funny?’ interview of Season 3 begin…

Describe yourself in the form of a tabloid headline

What would be your best piece of advice to give to a new parent?

Get the vasectomy booked in now. Parenting siblings is a special kind of hell (unless you had a multiple birth in which case, abandon all hope).

What was the last thing your child did that made you think:

a) WTF? – said “Look what I drew!”
b) OMG? – actually put a new toilet roll on.
c) FML? – said “Can you fill this syringe with dog wee next time Baxter pees in the floor”

Which of the following do you find most amusing:

Which of your own blog posts from history do you think is the funniest?

While they are, of course, all hilarious, this is my current favourite: https://methemandtheothers.com/how-to-avoid-sibling-rivalry-a-desperate-parents-guide/

If you could have a monkey’s tail or a giraffe’s neck which would you go for and why?

I’ll take invisibility. I’d use it to sneak into Google HQ and find out how their super secret algorithm works then I could make all my posts appear on page one (the first step in my plan to take over the world).

My son recently performed stand up comedy for his school talent show, my favourite joke was:

Where do you find a tortoise with no legs?

Wherever you left it.

(He was awesome by the way)

If you could have an everlasting gobstopper containing as many flavours as you want, what flavours would you choose to suck on forever?

Who would be best to play you in a film about your life and why?

Kathy Burke (from the Waynetta years)

What have you done as a parent since having kids that you swore you’d never ever do?

I was so naive before I had kids that I hadn’t even gotten as far as making uneducated judgements about people’s parenting, so didn’t make any unrealistic promises. I have however, caught vomit, had wee in my eye and had to clean poo from under my finger nails. I imagine that, had I considered these things, I’d definitely have sworn they would never happen.

If your eldest child became Prime Minister tomorrow what would be the first 3 pieces of legislation they would pass?

First he would ban school because it’s too much like hard work. Next he’d make it a child’s right to play computer games anytime they want including but not limited to before breakfast, after lunch, while eating dinner and during the night. Then, if we’re lucky, he’d make it someone’s job to “save the environment” (and if we’re not lucky, he’d make it law that adults have to listen to every story a child tells, even if it goes on for three hours).

If you love your kids, but think parenting kind of sucks, then check out my blog and you’ll feel totally validated.

Click on the sexy AF banner below to visit Me, Them & The Others.

And that is that for this week of ‘So You Think You’re Funny?’. Be sure to check back next week for another awesome interview with another amusing blogger! If you fancy taking part yourself visit our contact page and drop us an email. You could be our next interview star! Do ittttttttttttt!