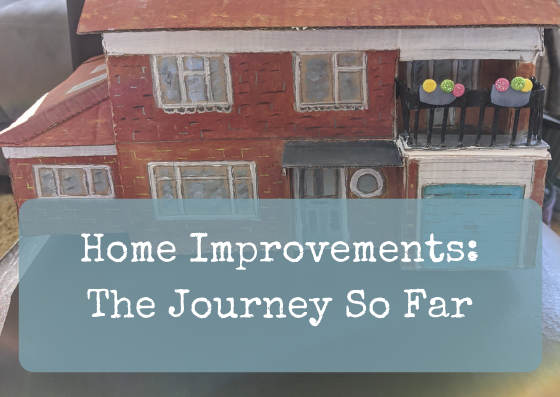 We moved into our current house back at the tail end of 2015 and had some grand plans for what we could do with it over the first few months in terms of home improvements.

For a start we were going to knock up a two story side extension to make a master bedroom upstairs and a playroom downstairs. Then we were going to redecorate every room, turn the crappy study back into a utility room like it should have been, make the downstairs toilet wider by knocking into a cupboard, putting an ensuite into another bedroom, building a porch, getting rid of the random balcony and completely redoing the front and back gardens.

Easy eh?! Anyway, we started with the easy bits and after a couple of months we had done the utility room and Joshua’s bedroom.

The extension itself took two years from when we moved in to build, as we hadn’t quite appreciated how incredibly long the planning process was. Or for that matter HOW MUCH THE BLOODY THING WOULD COST!

We gave up on the two storey idea because I would have had to sell both kidneys, and decided just to pay for a builder to build the structure of a single storey side extension. From when the structure was finally finished it then took me and my dad the best part or another year to get it all insulated and decorated and for the new kitchen to go in.

To make it worth the effort we made half of the extension into a playroom and the other half became part of the kitchen / diner / family room which I happened to put a projector and screen in. It was definitely worth the effort, although may not have felt it at the time…

The lounge was up next, with new fireplace and feature wall (we LOVE a feature wall) and then we built some wardrobes into our own bedroom and redid everything in there.

Finally we moved Joshua out of the smallest bedroom into the second largest room and made it all Lego themed, and we redecorated Joshua’s old bedroom to make it more guest appropriate and less 3 year old child-esque!

It’s been a journey, the most recent stage of which had been randomly wallpapering underneath the stairs!

But unfortunately one that we haven’t quite finished yet. The bathroom still needs doing. As do both toilets. And the bedroom with the random balcony attached to it, that we’ve never quite figured out what to do with! And no porch still, because we ran out of money. And no ensuite. And that downstairs toilet expansion plan hasn’t quite got there either, or the garden…

Finally, here is the very best our house has ever looked, courtesy or my parents wanting something creative to do during lockdown! Awesome isn’t it?!