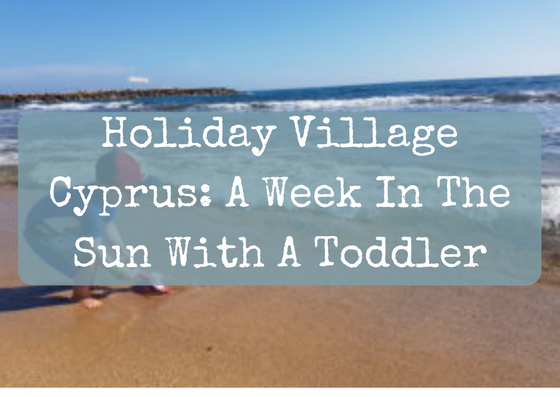 Holidays in the sun always used to be something to look forward to. Lazy mornings, occasionally dragging ourselves out of bed in time for breakfast, then drinking cocktails by the pool or on the beach, stupid amounts of buffet food and wine, more drinks in the evening with a bit of dancing, and the occasional day trip thrown in for good measure.

With a toddler, there’s still lots to look forward to. But there’s also the abject terror of how much they are going to kick off on the flight there and back, the constant fear of losing them in the blink of an eye, the worry that they won’t sleep / eat whilst they’re there and the high potential of them falling into a body of water.

We went for the First Choice Holiday Village option again this year. Two years ago we did Kos with them and that was great, but this time we went for Cyprus for a bit of variation. In Kos, Joshua was just coming up to his first birthday so he was crawling around the place but never quite fast enough to actually lose him. He was still in a buggy, so that made things easier as we could wheel him round when he got tired / grumpy. He also still did naps, so we could put him down in his buggy / bed and relax for an hour or two here and there. He was also young enough for the creche so we managed to pop him in there a few times so he had something fun to do with other little ones and we could explore a bit of the site. We even managed to have some drinks in the bar with some friendly Northerners we’d met on holiday!

This time around Joshua was nearly three and required a whole different level of eagle-eyed monitoring to prevent him from escaping / falling off things!

The flight out was actually not too awful – Joshua watched some Netflix on the laptop and played with a few of his toys for a while. He did do his normal escapologist act a few times by crawling under the seats in an attempt to explore the aisle but all in all it was pretty smooth, aside from the hour delay and therefore midnight arrival time at the hotel! Fortunately we had booked a separate room for him within our room (don’t worry, mum – he wasn’t in a different part of the hotel!) so he went straight to sleep when we arrived, whilst we did a bit of settling in. Win.

The introductory talk the next morning was a complete waste of space as they generally always are. Joshua was desperate to do anything that didn’t involve sitting listening to some barely audible northerners in flourescent t-shirts talk about stuff. We also discovered that given he was 2 weeks under 3 he wasn’t actually allowed to sign up for the kids’ club so therefore wouldn’t be able to take part in any activities during the week. Shame really as he is too old and lively to be entertained by a small creche so it meant the whole of the activities scene generally passed us by and that’s half the point of those types of holidays. However, given that the price goes up by £800 by the time he turns 3 it made sense to go when we did, despite the kids’ club rejection!

What it did mean was that we spent A LOT of time in the kids’ fun pool, which actually turned out to be really good fun for all of us! It had a pirate ship, and lots of falling water things and a plethora of slides to race around on. Given Joshua has bizarrely infinite levels of energy the pool days were LONG and ACTIVE! My assumption that there must be only so many times you can go up some steps and down a slide on a pirate ship was completely unfounded – I never counted the number of slides slid down during the week but it must have been in the billions. It was like a very long and very wet game of snakes and ladders, only interrupted by the lifeguard’s whistle and intermittent shouts of ‘You! Boy! Go now / Get down / Get off!’ shouted at various small people.

Despite initially appearing to be a pretty grumpy Eastern European child-hating gangster, the lifeguard actually turned out to be a really nice bloke and taught Joshua some valuable lessons about pool safety and queue participation!

The food was awesome throughout the week – lots of buffet options with something different each day and a special children’s section with lots of vegetables on it. You’d be hard pressed to find a 2 year old that gets quite so excited about vegetables as Joshua does – no idea where he gets it from, but long may it continue!

The only downside of the eating part of the holiday was Joshua’s obsession with legging it within a millisecond of him finishing his food. This generally involved one of us trying to explain why it’s not a good idea to run off, being completely ignored, and then dashing off after him. To be fair he did improve by the end of the week, but there’s nothing that makes you inhale your dinner quite as fast as knowing that your toddler is one bite of cucumber away from sprinting away into the sunset, never to be seen again!

There was also a decent range of local cocktails, poured with the kind of generosity that implied the contents of the various glass bottles of booze must have been REALLY cheap! Still tasted the same though and still turned out blue so I was happy.

The complex itself was gorgeous, with loads of ‘proper Greek-looking buildings’ and structures dotted everywhere and loads of pretty flowery things. It’s probably one of the nicest looking all-inclusive places we’ve ever been to and it was kept constantly clean and well-presented.

We couldn’t really fault the place. The only downside was probably the local beach across the road as the sand was like walking on gravel and the sea was more rocky than a 1980s Reading Festival lineup. Who needs a beach though when you have water slides to hurl yourself down ad infinitum in the pool?!

The beach trip was further ‘enhanced’ by the fact that Joshua managed to piss down Sarah’s side as she carried him down there – swim nappies are great for some things – holding piss is not one of those things! We did get some lovely beach-based photos though and Joshua had a great time digging in the sand, so that was the important part!

One evening was a bit of a pain when the fire alarm in every room in our whole block went off for a full 30 minutes at 9pm before someone from the hotel could be arsed to sort it out.

I could drone on about it all for another few thousand words, but no one wants that – especially me, as I’ve still got to tart around beautifying this post with more photos than you could throw a stick at. Suffice to say it was an awesome holiday, Joshua was actually really well-behaved and had a brilliant time and we’d all happily go back there next week if we could afford it!

Apart from one playful child who kept bumping into / shoving / kicking everyone else every day in the pool despite the attempts to reason with him by his intermittently interested parents, the bizarre decision to drop us back at Pathos airport 3 whole hours before our return flight and irritating fire alarm there aren’t really any negatives worth mentioning. Just a great holiday and thoroughly recommended!

PS – I didn’t even get paid to write this post – the holiday was just THAT GOOD!