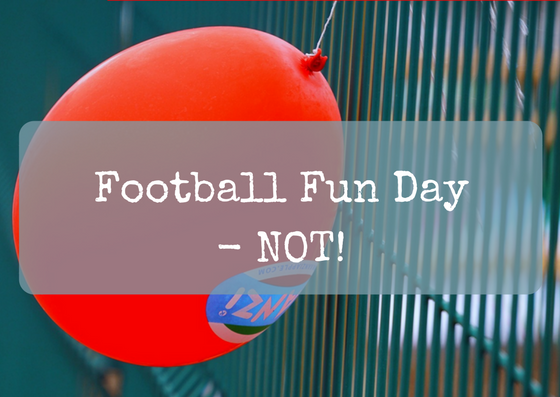 Youngest son’s football team had a ‘Fun Day’ last weekend, so we loyally went along. As predicted the only fun was had by our son; trying to see how much money he could get out of us – for him and his friend to spend on ‘fun’.

The tiniest burgers inside the hugest buns were forced down by the four of us, extortionately expensive (and not that pleasant) cupcakes were purchased by me and a completely ridiculous amount of tombola tickets were bought by the boys. The lure of possibly winning a bottle of shampoo, a tiny bar of chocolate, a crocheted toilet roll cover, a plastic mug with a picture of flowers on it or a toddler’s colouring book was obviously too great.

They didn’t win any of them.

Both boys thoroughly enjoyed a game of bubble football: child is strapped into a massive inflatable bubble and then rolls around the pitch. Aim is to push a football between each other and ultimately score. From what I could see the kids didn’t give a toss about the football – they just enjoyed rolling around the pitch.

The one bit of ‘fun’ (for us) came when son’s bubble rolled over too far, got stuck and left him dangling completely upside down. I eventually managed to stop laughing enough to go over and roll him upright – but on husband’s video of the whole thing I can clearly be heard saying , “Don’t help him up until you’ve taken a picture.” Dear me, not a model mother then…

The two of them hooked ducks in a barrel, tossed hoops onto sticks, kept returning to the over-priced second-hand tat stall, drank copious amounts of fizzy pop, ate vast quantities of cheap sweets and played tug-of-war…with themselves. When it started to cloud over we sent up a silent prayer to the weather gods, then tried to sound sincere as we said, “Oh no! What a shame…we’re going to have to go.”

Trying not to smile too much we dragged them out of the queue for the under 8s bouncy castle (they’re 13!), quickly marched them past the ‘Name the (******* huge) Teddy’, swerved deftly away from the chocolate fountain that several snotty-nosed kids had shoved their fingers into – and left.

Phew! We’d done our bit for another year. Large gins here we come!

This post was first published here. For more from the ever eloquent Midlife Dramas In Pyjamas click here, or below. You may regret many things you’ve done today, but this will not be one of them!