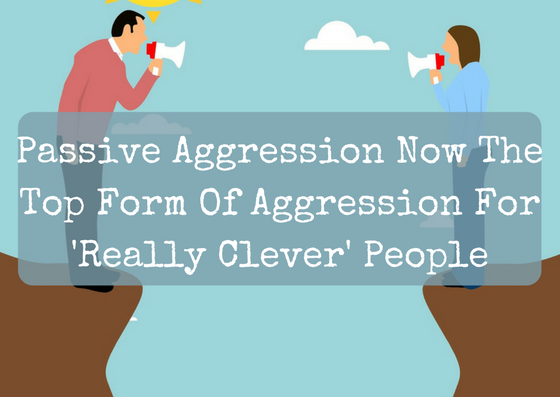 A ‘stunningly well researched’ study has thrillingly shown that passive aggressiveness is now the ‘go to’ form of aggression for brainy Brits.

The team of really clever and well thought of researchers, led by my personal heros Nobby ‘The Knob’ Knobberson and Shirley ‘No Shit’ Sherlock spent 5 months working really hard on this ground-breaking, very well-written piece.

To ensure their research was super accurate they confined it purely to Twitter. Because obviously that’s a really sensible thing to do.

They studied the tweets of 72 (because 75 would have been too much work, clearly) bloggers over a 3 month period. The tweet breakdown by theme was found to be as follows:

Traditionally aggressive comments (e.g. you’re a twat / idiot / I hope your bollocks get eaten by a rabid donkey you bell end) – 3%

So where does this brilliant research leave us? Has it cured cancer? Has it obliterated world hunger?

But we do now have conclusive proof that some people on Twitter are a bit Twattish. Who’d have thought it?!

Now that their world class study is complete Nobby and Shirley can return to designing rockets or repairing brains or whatever other super important things really, really clever people do.

If you’re bored of real news and fancy a few more fake things in your life why not check out some of our other fake news stories.