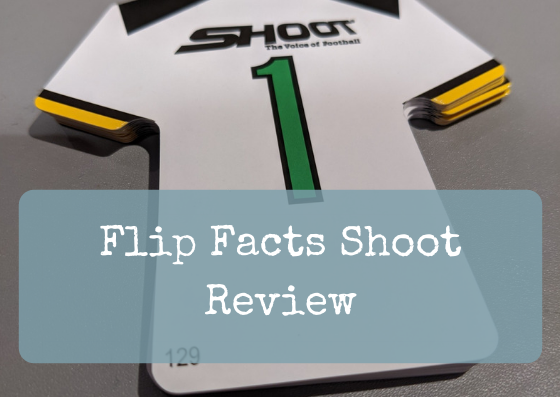 Every football lover will have heard of the magazine ‘Shoot’ which was a mainstay in the football world throughout my formative years and still exists online and in an annual format.

Now there is a fun card-based trivia game of the same name to put your football knowledge to the test and we’ve been testing it out recently. It’s full name is Flip Facts Shoot and it’s from John Adams and retails for around the £15 mark.

First up, it’s aimed at ages 8+ but I played it with Joshua who is 5 and we still managed to have a decent game, despite him knowing none of the answers! So if you’re worried your little one doesn’t quite have the trivia knowledge required you can still play it like a football shirted version of Brucie’s Play Your Cards Right!

The game set up is actually pretty straightforward. Each player receives 14 cards / shirts with a number on one side and a trivia question on the other side. They must then pick a formation in which to lay out their cards. As you can see, I went for a fairly attacking 4-3-3.

Each player also gets a couple of yellow cards, a red card and a substitution card, in case they wish to swap out any of their original 11 shirts / questions for one of the ones on the bench.

Play starts with the first player (chosen by coin toss) flipping over his left back card to reveal a number. If the number is red, play switches to the other player. If it’s green however the player reads the trivia question on the next card to the right and guesses if the answer is higher or lower than the first number.

Every time the player guesses correctly and ‘keeps possession’ they move one shirt to the right. If they keep answering correctly they move up through the midfield until it reaches the final striker. At that point they can take a shot at goal by answering the trivia question on the opposing team’s goalkeeper. Again if they guess correctly they score a goal.

The game is then played all over again and the goals scored in both ‘halves’ are combined to identify a winner.

As mentioned before you can easily play the game without knowing any of the football trivia, but if you do know your facts and stats it should make it a lot easier to win! Having said that, despite knowing none of the answers Joshua still managed to win, like he does in every game of anything we ever play…

Flip Facts Shoot is a fun game that’s easy to play and doesn’t rely on a wealth of football knowledge. It’s the kind of game you can whip out if you have a spare twenty minutes and doesn’t require much setting up.

To make it even quicker there are also three additional mini-games. They all involve using the cards and are all trivia based, but are more rapid-fire that the full game. For example, in one mini-game each player takes 11 cards and must take it in turns to guess whether their card is higher or lower than the card in the centre of the pile. If they get it right they can put a card down – if it’s wrong they keep it, with the player to lose all their cards first the winner.

Joshua definitely enjoyed himself, and found the whole concept of trying to work out whether the next card would be higher or lower pretty exciting, especially when I turned over a red card on numerous occasions!

So whether your children have memorised the final points totals for every English football league for the past 3 seasons and have been collecting Match Attax trading cards since birth, or if they just have a passing interest in football I can recommend Flip Facts Shoot!

You can buy it at all major retailers including Amazon through the affiliate link below.

For more reviews check out our Reviews & Giveaways section.