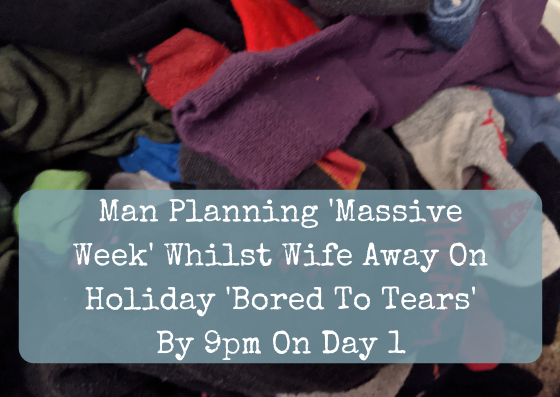 A father who had been planning a wild few days of drinking and debauchery whilst his wife was away on holiday with friends ended up ‘bored shitless‘ by 9pm on the first day it has been revealed.

Doug Miller, 39, from Barnet, had initially planned to spend his days of ‘freedom’ living life to the max, reliving his youth in the company of his hardcore mates.

‘Dangerous Doug’ as he was known to his friends in the nineties, immediately reached out to his liveliest friends when his wife first revealed she’d be heading to Malta with her BFFs for 4 nights.

However, the wheels began to come off when Doug remembered all of his friends worked full time Monday to Friday jobs and weren’t free during the week.

Undeterred, Doug decided to be spontaneous and head into London to meet some new people and dance the night away fuelled by a plethora of vodkas and Red Bull. However, he suddenly recalled that this was also not possible given he had to look after his two children, Amy and Jamie.

Desperate to do SOMETHING interesting during his few days of leisure, Doug arranged to meet a couple of friends in the microscopic window of opportunity that is the school day to ensure he wasn’t too bored.

Amazingly, this also went Pete Tong, when one friend decided they couldn’t be bothered and the other was struck down with car trouble.

By 9pm on day 1, Doug, having consumed a family bag of crisps, two doughnuts, half a litre of vodka and an entire bag of Haribo, gave up hope and resigned himself to a week spent folding pants, pairing socks, stripping wallpaper and watching Judge Rinder in the gaps between the school run before settling down for lively evenings watching Minecraft videos with the kids on YouTube and epic nights spent scrolling the internet.

PS – any similarities to real life events are purely coincidental.

PPS – Mum, when you read this I promise I haven’t had half a litre of vodka.