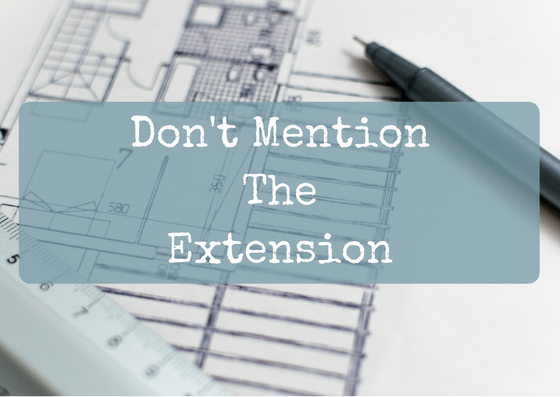 For over a year now, we’ve been waiting for our extension to get started.

The plans for said extension went in to the Council in December 2015 and since they were given the OK we’ve had a nightmare trying to remortgage. The reason for this is that we bought our house through some bizarre equity loan scheme. It sounded like a brilliant idea at the time, but the staff working for the company which provided us with the equity loan seem to be just slightly worse than entirely incompetent.

One of them actually got quite put out because I didn’t own the email address firstnamelastname@gmail.com and as such hadn’t received their correspondence, despite their insistence. Definitely my fault, that. The phone number they called and left messages from, when called back, actually went through to a lift somewhere in the building. It would have been fairly funny if it wasn’t so bloody annoying.

We finally got the finance side of things signed off a few weeks back.

Fortunately, our builder didn’t have availability until April anyway and so when the money arrived in the account in the middle of February rather than the beginning of December as planned it didn’t actually matter too much. It does all feel slightly more ‘real’ now though.

The fear has hit me, and not just because I have to try not to fritter away a very large sum of cash on chocolate and wine. It’s a sizeable erection (if you tittered, then you’re totally in the right place) at two storeys. It also means the demolishing of the existing conservatory and garage which for some stupid reason we said we’d do ourselves, despite neither of us having a practical bone in our bodies.  Anything to save money huh? #idiots

Building your own house, or adding to it, is probably a foolish thing to do with two young children in tow. Sadly though, the little blighters keep growing and acquiring more stuff and I don’t have the energy to go all Kon Mari. I need the space. We need the space. The kids can’t share forever. Living squeezed into one main room isn’t practical and the tidying is constant and depressing.

I long for a room where I can shut the door to all the crap and crud.

One which I can leave, as it is, go into a different room, and not worry about it. My room; a living room from where I can ban the children, where I can buy nice, quality solid oak furniture for the home, and it won’t have snot or fingerprints all over it.

The conservatory which we termed the ‘glass cathedral’ when we moved in, in which we envisaged lovely dinner parties and glorious summer evenings, is basically a dumping ground-cum-laundry that is too hot to use in the summer and freezing bloody cold in the winter. If you’re considering a conservatory, my advice to you is to have your head checked out and spend the money on something more useful, like a life-size model of Chris Hemsworth.

There is going to be a lot of dust, noise and mess, for a long time; pretty much the entire summer, because you just know we won’t actually get going on time. Mark my words, this bloody extension is going to get going just as preschool and all the toddler groups finish and the kids at home with me all day, every day.

I have already prepared myself to repeat the mantra ‘It’s going to be great when it’s done’ over and over, rather than just wishing we’d moved instead, because let’s face it, that would hardly be painless (albeit, over more quickly and probably into a house where the kitchen isn’t falling apart).

It’s going to be great when it’s done.