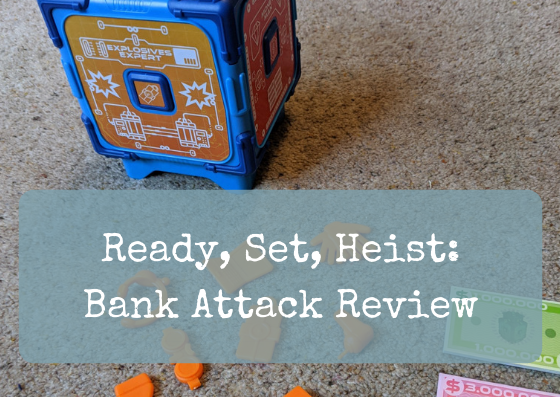 As you may remember I popped along to the yearly festival of toys that is Dream Toys recently. Amongst all the excellent stuff there was a game called Bank Attack, by Ideal, which we tested out at the event and were given a copy to bring home to try out with Joshua.

Now I’m a little bit biased given I fell in love with the game at Dream Toys, but I’ll try to be balanced…

The premise behind the Bank Attack game is that you are part of a team of bank robbers looking to pull off a daring heist of a bank containing gold and 50,000,000USD. Worth having!

Each player assumes a role in the game, either Money Man, Explosives Expert, Lookout or Hacker and working as a team you must follow the instructions of the gang leader to successfully break the bank.

Once you’ve set up the safe, set out all the game pieces, sorted the money into piles and picked your roles it’s time for action!

Everything that happens in Bank Attack is dictated by the talking bank vault, with the voice meant to represent your heist supervisor (if such a role exists!). The voice will tell you to complete various actions involving the game pieces. This could be to take a particular piece, or swap it for another piece or give it to another player or use the object.

For each of the instructions you follow correctly you will be told to take an amount of money into your stash and the safe will gradually start to open.

If you complete all of the required tasks in the time allowed the safe will burst open and the gold bars will jump out ready for you to load them in your getaway car and move away to somewhere sunny with no extradition arrangements in place!

If you get any of the instructions wrong however, or take too long to complete any one task, you will miss out on some of the cash. If you make too many mistakes the alarm will sound and you will spend a lifetime in the Big House instead of on the beach!

But when the vault is beeping at you at increasing speeds, the instructions are pouring in thick and fast and you’re reliant on your fellow players to be as focused as you are it all gets a bit tense!

There are five levels of difficulty too. Level one is a good warm up and is definitely achievable as long as you are all concentrating. Joshua did really well on this level and the three of us completed it on the first attempt.

Level two again isn’t too bad really. Level three gets a touch stressful and Joshua struggled to do the tasks quickly enough as you literally need to think and act at the same time. Let’s not even talk about levels four and five…

The best part of the game for me is the teamwork element. You either all succeed or all fail, so you really need to help each other out by pointing and prodding if someone misses an instruction! Alongside that, the pressure makes the game really exciting to play. You’ve really got to be on the money in order to win the money.

We all really enjoyed playing the Bank Attack game and it’s something we are looking forward to whipping out at house parties and family gatherings in the future. It’s really easy to get into but really hard to complete and that’s the kind of game that I love.

Bank Attack is available at all major retailers at around the £20 mark including Amazon (affiliate link below). It’s aimed at 7+ but my five year-old enjoyed it a lot too, especially on the easier levels and especially if he could be the money man!

For more reviews pop along to our Reviews page. You can also stay up-to-date through our Facebook page.