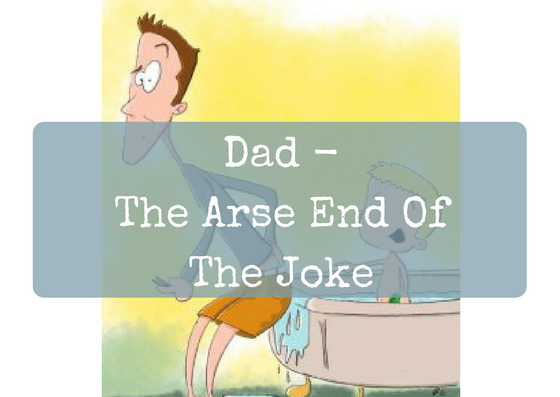 
(Warning: This post may conjure up disturbing mental images of my rear end. I apologise)

“Is it wrong I’m proud of him? Like he’s passed some sort of “lad test” or something?”

My 4 year old son was in the bath, playing with his cups.

I was sitting on the edge of the bathtub, facing away from him.

I had cut his toenails before the bath and now I was taking the opportunity to cut mine.

MAYBE, it is possible, MAYBE my jeans had ridden slightly low at the back.

It is also SLIGHTLY plausible that my underwear had followed suit.

I don’t make a habit of exposing myself to my children, but in this instance I guess some of my bottom may have been visible above the waistline of my jeans. It was a product of that awkward seating position and I apologise for the mental image.

As I clipped at my toe nails I was unaware of the developing situation behind me, but with hindsight, it had gone a little quiet.

The first I knew something was different was when I started getting a strange damp feeling in my underpants.

I was warm, and wet and it seemed to be spreading rapidly. I’m 33, so I was pretty certain I hadn’t “had an accident”.

All at once the physical sensation and audible evidence came together as my son burst out in hysterical laughter and I realised the whole bottom area of my jeans was now covered in soapy bath water.

The little blighter had quietly filled up his cup, positioned himself with access to my exposed underpants, and proceeded to pour half his bathtub into said undergarments!

He knew exactly what he was doing, he had displayed a new developmental trait, he was being mischievous!

Up until this point my son’s understanding of behaviour has been binary, either good or bad. You can read what his strict moral code made of the other kids at his nursery.

This situation was different.

He knew he was being bad…but it wasn’t THAT bad. It was banter!

He appreciated that the comedy in his actions outweighed the possible anger I might feel. Truly, I’m proud of him too.

Although this bathroom incident was his first try at physical comedy, he has been experimenting with jokes recently too.

He has discovered Knock Knock jokes. Although, they don’t really follow the accepted logic. Usually it’s:

“Err…” desperately looks around the room for inspiration. “Err….Doggy.”

*belly laughs* from him.

*polite praise* from me.

However, he did recently serve up the comedic opportunity of a life time during a family dinner.

After a few rounds at the table playing Knock Knock. He realised he could use the actual door. Left the table, left the room, closed the door.

A minute later there was a knocking at the kitchen door followed by a 4 year old shouting “Knock Knock!”

“Who’s there?” We all shouted.

At this moment the pace and desperation of the knocking and kicking accelerated as he realised he couldn’t open the door by himself.

Cue immediate response from all the comedy geniuses at the table:

Oh man I crack myself up.

Fear not, we let him in…eventually, once we’d stopped laughing.

I don’t think I’m being over critical to say that his verbal jokes need a bit of work. There isn’t a great link between the set up and the punchline, his delivery is often a bit rushed, I feel like there is an element of assumed knowledge that I lack in order to make a Doggy Carrot quite so comical.

However, something I have noticed is that his little 4 year old friends find telling those kinds of jokes hilarious. Two of them will play Knock Knock together, come up with a completely non-nonsensical stream of consciousness, then fall about laughing as if they’ve just come up with a witty pun that Spike Milligan would have been proud of.

What is it they’ve connected over? What common understanding do they have that means Doggy Carrot is the funniest thing they’ve heard?

I think it’s the realisation that they can change the direction of their thoughts. They know what SHOULD be happening next, but they get joy in subverting that expectation. In truth its not dissimilar to the first time he lied.

Humour is a topic I don’t think we really dig that deeply into normally. I remember there was a whole wall on the psychology floor of my University Library dedicated to humour. I’ve often wondered why I wrote my dissertation on sexism when I could have been studying jokes!

There are so many things that go into making something funny. Timing, delivery, the rapport between the joker and joke-ee, the actual quality of the event/joke!

It goes without saying that the rapport between my son and I is pretty high.

I suspect he knew I would see the funny side of having water pouring onto my bottom.

In this instance his timing and delivery were pretty spot on. He really seized his moment.

So credit where credit is due, you got me buddy! But, a few words of friendly advice;

This was first published here. For more from MadDadSkillz click the banner or check out some of the recent posts below!

One thought on “Dad – The Arse End Of The Joke”