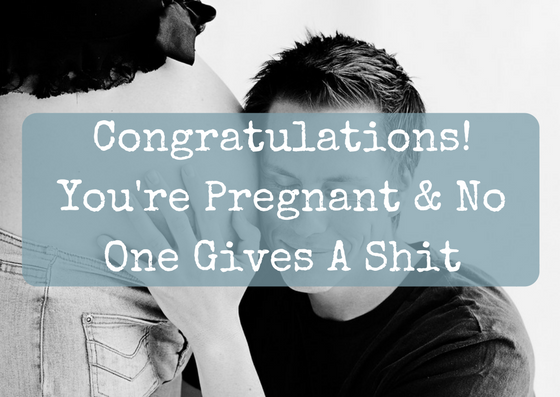 You went to the Harvester and finally decided to be a fat knacker and order the chicken and rib combo.

BBQ ribs shouldn’t be consumed in public, you knew that but you could no longer fight the urge.

You ordered a large house red.

It wasn’t going down. Every mouthful made you wretch a little. Concern crept in.

Your food arrived, you couldn’t stomach it.
The dish you’d been hankering for was sitting there in front of you, uneaten.

Two days later you pissed on a stick – two to be precise.

You’re growing a human inside you, this is immense. You want to shout it from the rooftops.

Alas, no one gives a shit.

Grandparents and close family are thrilled, almost as thrilled as you but that’s about it (and a lot is probably fake).

Your friends are happy for you, really they are. They will ask all the right questions and coo at the grainy black and white image you show them. They will even pretend to think the baby is waving too. But beyond you and baby being healthy, they really couldn’t care less.

Think about it, every friend who has had a baby, you’ve been happy for them but you’re not actually that bothered.

If you’re the first in your group of friends to get pregnant it is exciting for a moment but then everyone starts thinking about themselves.

You’ve made them realise they’re getting old. Life is moving forward.

Your single friends are weeping into their Lambrini, wondering if they’ll ever settle down and have children.

Your couple friends are wondering if their other half is now expecting to make this step toward being a proper grown up too.
That’ll interfere with poker night.

Both groups will swiftly rule you out of social events whether you like it or not.
They won’t consider whether you want to attend, they just won’t invite you. After all, we all remember how dull Fun Bobby was when he stopped drinking in that episode of Friends.

Friends might feel bad for neglecting your pregnant self. They’ll invite you round for dinner but they’ll forget that in your fragile state you can’t enjoy soft cheese, pate and champagne. You’ll sip water and nibble bread like a martyr.

Someone will politely, and accidentally, ask you a baby question. You’ll grasp it with both hands and talk about nursery colour schemes, Primark maternity leggings and ‘travel systems’.

The problem is, it’s no easier being the last one pregnant in the group either.

You’ll see the little blue lines and thank your lucky stars that your friends have all had babies. You have a ready made support network. These people will be interested in your cravings and irrational hormones.
They will want to advise on cots, V Pillows and nappies.

After being bored shitless by all of their pregnancy and baby crap it’s finally your turn to shine. You will have a captive audience.

They’ve heard all your hilarious pregnancy tales. They did it first.

Eyes will roll when you fret about your mucus plug because it’s not actually that big a deal. Laughter will ripple when you describe your well thought out birth plan (yes, it’s a waste of paper) and adamance at doing it drug free.

They know you’ll take whatever is on offer.

They have their own children now. In fact those very same children are trying to eat discarded chips from the pub floor.
They no longer have the time to listen to anything.

You may feel like the only ever person to have experienced a pregnancy quite like this. They’ve been there, done that and got the snot covered t-shirt.

Once your bundle of joy arrives they will duly come and visit you. They will nod along as you recount the most amazing/easy/difficult/hilarious birth story.
They will regift you that snowsuit that ‘wasn’t quite right’ for their baby.

They’ll tell you how beautiful your baby is but will actually be thinking how lucky they were to have a pretty one. You won’t see them for a while because, to be honest, you’ve become a bit of a bore.

Congratulations, you’re having a baby and no one gives a shit.

This post was crafted especially for us! For more from the brilliant Me, Annie Bee click on the image or recent posts below! You won’t regret it. Probably.