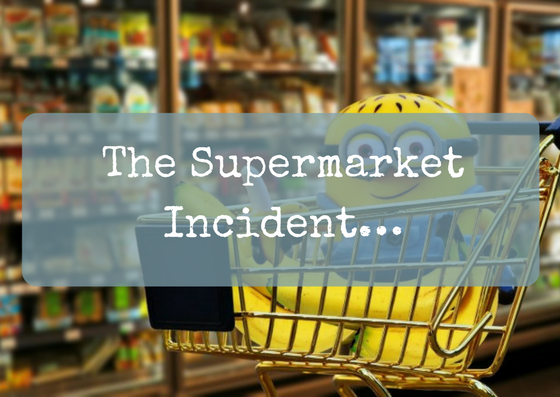 To all those who have ever braved a supermarket with a toddler.
*Salutes*

We’ve generally done all our shopping online,
And up to a point it has suited us fine.

But for ACTUAL shopping there’s much to be said.
It’s nice to browse broccoli and fondle the bread.

With The Big One at playgroup my child count was one,
So I thought we could risk it?
You know… just for fun!?

So into a trolley The Small One was placed,
And he giggled as in through the car park we raced.

We would make a new game of our weekly-shop chores!
The store drew us in as we rolled through its doors.

On a Supermum mission to make this thing fun,
I pulled out a list and our game had begun!

Each item we sourced was considered a win,
As The Boy yelled at great volume “ME PUT IT INNNN!!!”

No things could be reached for from basket or shelf,
Without him demanding “ME DO IT MINESELF!!”

All products were snatched from my hands with sheer greed,
And launched into the trolley at hurtling speed!

My tiny dictator sat swinging his legs,
As I tried to distract him to sneak in some eggs.

When I slipped on what looked like a pool of shampoo.
Which some numpty had spilled and ignored? As you do!?

The shopping was mounting precariously,
When he boldly announced that he’d quite like a wee.

So I eyed up the trolley considering how,
Whilst the tiny loud human explained “Need wee NOW!“

Speed seeking of toilets is one of life’s skills,
With my near-leaking toddler I shoved past the tills!

The deed was accomplished in less than a blink,
But he then took ten minutes to play in the sink.

Before scuttling back to the trolley we’d  parked,
So more things could be launched and more orders be barked.

The Boy with his launching of all of the stuff,
Had perhaps been a little excessively rough?

And the shampoo I’d blamed on a “smidiot” swine,
Had in fact been a cracked open bottle of mine!

We’d been leaving a soapy luxurious trail,
Like that of a huge Herbal Essences snail.

I cringed and returned to the scene of the crime,
Where a gaggle of staff had appeared by this time.

Who were now on their radio making a call:
“These blue paper towels are no use at all!”

So I shuffled across and I confessed  my guilt.
Relinquished the bottle from which it had spilt.

Apologies over, we retraced our route,
The Toddler now weary and fractious to boot.

As the cleaner appeared on a ride-on machine,
With around half the store now to have to get clean.

So he followed us loudly wherever we went,
Along with a soft soapy “cupuacu” scent.

The trolley was heavy.
The Toddler was bored.
A number of not-helpful tuts were ignored.

But I heaved through the shop like the new Hunger Trials.
Around all of those people that chat in the aisles.

The checkout was reached having taken its toll.
I thus parted with cash and a chunk of my soul.

…For the sake of the store though I’ll stick to online!

This brilliant rhyme was first published here. For more from the very, very lovely Dawn from Rhyming With Wine click on the image or recent posts below. Also don’t forget to check out Dawn’s new venture with our other good friend Gemma from ColleysWobbles at Wobbles & Rhyme – it’s going to be amazing! 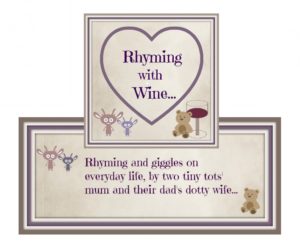