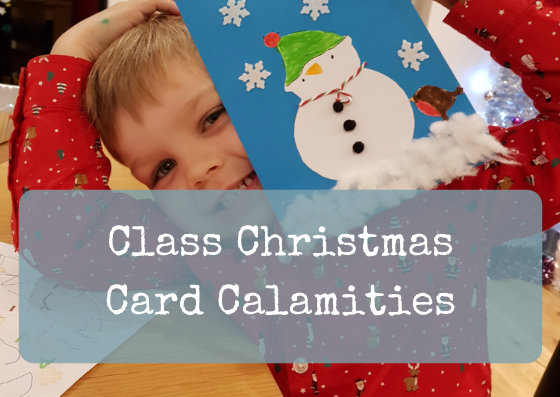 The Perils of Christmas Cards with Kids!

This year was our first proper attempt at getting Joshua involved in the magical world of giving and receiving Christmas cards to his friends. ‘How hard could it be?’ were my initial thoughts. In my mind it involved:

2. Get Joshua to tell me who he wanted to send them to.

5. Take them to school and create joy for his friends through the magic of card receiving.

In short, it was a lot more challenging than I expected – stages 2 and 4 specifically.

Let’s start at the beginning and, in doing so, identify the manifold issues, woes and heartbreak inherent in the process.

As a bit of background, there are two classes in Reception, each containing 30 joyful souls.

Tip 1: Don’t purchase 30 cards and assume that will be enough for a year of 60 people.

The theory was that Joshua would be able to select up to 30 friends to send cards to based on those children he spends most time with / likes the most.

To make this dream a reality we sat down and asked him to tell me who his best friends were. This is where the fun really started.

Tip 2: Leave plenty of time for this. At least 5 hours but ideally a couple of solid days.

Having nailed about 10-15 names it seemed to be going well. Almost too well in fact.

‘So is that all of your friends, Joshua? No one else we’ve missed off?’

(From here on I’ll be using fake names to protect the innocent.)

‘How about Dave B? Isn’t he your friend too?’

‘Yes, I forgot about him’

‘And how about Steve? Shall we do him a card?’

‘But you talk to him every day!’

‘But yesterday you said he was your best friend!’

‘I do want to give him a card’

This was a pretty common discussion piece during the list-creation phase.

To save missing off any other friends / not-friends / best-friends-from-yesterday I then whipped out the class list kindly provided by the school (seemingly for the sole purpose of assisting with Christmas card creation) and we went through each name.

Some of the highlights of this process included:

‘I don’t want to give Mike a card as he wee’d in someone’s shoe.’

‘Megan can’t have a card as she talks too much when we’re sitting on the carpet.’

‘I can’t write a card to Theodore as he’s called Logan.’

After a period of discussion more intense and painful than a trip to Brussels for a bit of tea and a post-Brexit trade negotiation we had settled on around 35 names.

At that stage the parental considerations came into play.

Tip 3: Consider the other person’s feelings. Unless they’ve wee’d in your shoe

Perhaps Nigel is a nice boy at heart but has trouble expressing his feelings? Is weeing in someone’s shoe serious enough for Mike to warrant being omitted from the card list? Is Theodore really called Logan?! Do we just send a card to everyone as that would be a nice thing to do? Should Joshua be made to send a card to people he doesn’t like / know or would that create a lifetime of mistrust?

It was a bit like that part of the X Factor where they narrow the contestants down into smaller numbers by moving their photos around a table.

‘Do we go for person X because she sent Joshua a card with kisses in it?’

‘Has person Y got potential to become friend material next term?’

‘Shall we just put them all through?!’

We finally all agreed on a list of 40 names after protracted negotiations that began in November. Then the physical work really began…

Tip 4: Find a pen that doesn’t smudge when your child grabs the card with their clammy fingers.

Because, of course, when you’re a parent writing in Christmas cards you know that other parents will be reading them and judging you. You also know that you should be setting a good example for the child recipient along with your own child sender.

So neat, joined-up, evenly-spaced, clear writing is the order of the day. No squiggly, illegible scratchings like normal. And then there’s getting Joshua to write his own name on 40 cards…

To be fair he did much, much better than expected! Yes, there was a bit of interchange between joined-up writing, lowercase, uppercase and some minor sizing variations, but each card clearly said ‘Joshua’ and he did each one by himself. Legend!

So that was that for the Christmas cards for children for this year, as he trotted off with his 40 envelopes and popped them in the school post basket.

However, as he only got given 17 Christmas cards in return we’ll be keeping a close eye on the ‘unresponsive’ 23 over the coming year. I’m not saying they definitely won’t be getting a card from Joshua next year, but if they also fail to deliver on the birthday card front come May it’s not looking promising for them…