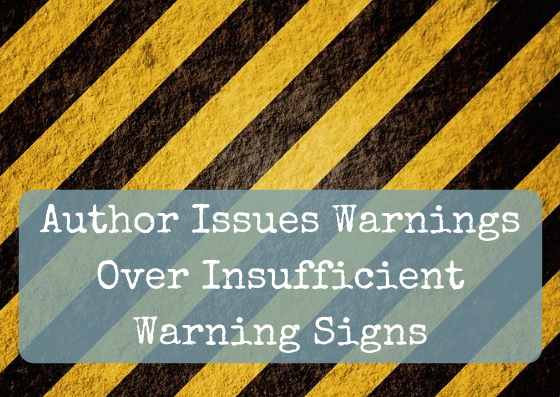 The author of a book titled ‘Warning Signs For Dummies’ talks to us about the explosion of warning signs in today’s society, but leaves us with his own stark warning that no amount of warning signs will ever prevent stupid people from doing stupid things.

When asked about the concept behind his book the author, Warne Warner, told us that ‘Throughout history people have done stupid things, but in the last few years there have been so many warning signs erected that people have actually become MORE STUPID. Lately, people cannot do even the most basic of things without being warned of the potential consequences.’

Warne uses the book to suggest improvements to some of the existing signs seen in the UK. Some examples from the book are:

A McDonald’s box of Chicken Nuggets with the warning ‘May contain chicken’ – here Warne suggests that this sign was actually pointless as there is such a negligible chance that you would find chicken in a Chicken Nugget.

Aside from those signs already in existence, we surveyed shoppers in retail giant ‘The 99p Store’ to see what other warning signs would help them lead an easier, less dangerous life.

One shopper, Connor B Levitt, told us ‘sometimes when driving I forget which side of the road I should be on – this could be easily solved if the council put up a sign saying ‘keep right’ on all roads. I also accidently burnt myself once when I got in the bath as I had forgotten to put any cold water in. They should really colour hot water red when it comes out of the tap so you know it’s hot’.

Another shopper, Eileen Dover, said ‘last year I got a nasty electric shock when I put two metal forks into a plug socket to see what would happen. This could have been prevented if the holes on plug sockets were permanently covered over so you couldn’t put anything in them. Or if all forks were made from plastic. I blame that junky bloke who owns the EC. He doesn’t let us have bendy bananas but still lets us have dangerous electric sockets in our houses. That’s why I voted IN because I want bendy bananas IN the shop’.

Ellen, subject to a pregnancy scare last year, having already dragged up 7 children, suggested that someone should also ‘label penises to make it clear that they may contain babies’, although we THINK she may have been joking.

What is clear from ‘Warning Signs For Dummies’ is that some people need that little extra help to get through their daily lives unscathed and that this trend is set to continue.