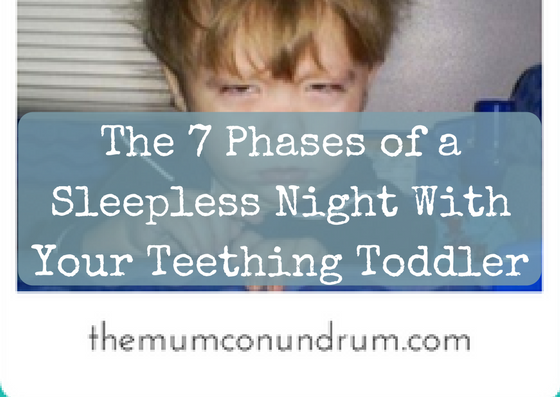 For most of you, basking in the afterglow of two weeks of drinking, eating, and slobbing out watching Christmas movies, is only barely muted by the effects of a fortnight’s hangover. That, and the sense of remorse for scoffing all those Ferrero Rocher, which washes over you when you try and squeeze back into your skinny jeans.

For me, these regrets are just the tip of the iceberg, for I am a survivor of F.A.S.A.C.

F.A.S.A.C. (otherwise known as Fuck All Sleep At Christmas) is a condition that affects a significant proportion of mothers to the under 5’s during the festive season.

It is a particularly cruel condition because, owing to circumstance, the sufferer has conflicting needs:-

On the one hand, they may well already be sufferers of F.A.S. (a similar affliction which can occur at any time, as detailed here), and understand that this means they should probably get an early night and grab a few ZZZs while they can.

But on the other hand it’s bloody Christmas, and they’re going to bloody well enjoy it even if they’ve got a teething toddler waking them up at all hours. Because otherwise it’s a bit of a thankless task slogging their guts out for weeks getting everything organised just to sleep through the best bits, thanks very much.

So here I am in January. F.A.S.A.C. survivor, and mere shadow of my former self. Still feeling a bit delicate after all the booze, rather squidgier and hoping that my clothes have just shrunk in the wash a bit, and tireder than a tired thing should be.

The 7 Phases of a Sleepless Night With Your Teething Toddler

Some time around 3.30am on 27th December, I was  sitting on the sofa in our darkened lounge, with only the soft glow of the Christmas tree lights and the dubious delights of Nick Jnr on the telly to light the room.

As my grizzling 15 month old clambered around over my exhausted and ever-so-slightly hungover carcass it occurred to me that, much as I experienced with her two older siblings, there are several distinct phases through these long and arduous sleep deprived nights with a teething toddler.

The process and inner dialogue of these phases runs as follows…

Right, this is it. Tonight’s the night she sleeps through. We’ve got this. She’s had a decent dinner and a big bottle of milk.

She’s been bathed, changed and read to. We’ve given her Calpol, Dentinox, and Nelson’s teething granules, her dummy, and loads of cuddles. She’s got just the right amount of clothes on, the room temperature is ideal, the nightlight is on.

I’ve popped her in her cot and walked out of the room… It’s Quiet. She’s settling… Baby monitor on? Check!

All quiet on the western front. THIS IS IT GUYS. SHE’S SLEEPING!

Crack open that bottle of wine open and stick Netflix on, we’re onto a winner!

Shit. Is that the baby monitor? Oh bollocks she’s woken up… “Pause Netflix a sec.” I’ll just quickly settle her.

Easy does it – don’t open the door too wide and let the light in. Where’s her dummy? A-ha, gotcha. Quick smidge of Dentinox on the dummy, pop it in her mouth, lie her down gently, brief stroke of the hair, tiptoe backwards towards the door….

…Aaaand I’m out of the room. *Quick pause outside her door*:- Silence. *Tiptoe back downstairs avoiding the creaky step*. Hey, check me out with my stealth manouevres – I am literally Indiana Jones right now.

Back in the lounge *quick look at the monitor*…? She’s sleeping. Yesssss!!!

-Shit, she’s up again. Ok, fine. That’s fine. We’ve still got this. Let’s just eliminate her reasons for waking. *Nappy change*. Is it time for more Calpol, hmm? *Jiggle the nightlight back a bit in case the angle was making it a bit too bright*. Dentinox on the dummy should do it… Or not.

Ok I’ll just cuddle her for a bit until she settles….

…20 minutes later *repeat Indiana Jones routine, only this time retreating into own bedroom*.

*Slide, silently ninja-like into bed. Turn off light in slow motion in case tiniest sound wakes her again. Lie tensely in bed for approximately 20 more minutes in anticipation of further disruption before eventually drifting off to sleep*

Oh Christ she’s actually standing up in the cot. She’s properly awake. And really fucking loud! Quick, scoop her up (please please don’t wake your brother and sister – I SO can’t do double / triple re-settling at this time…)

Maybe if I just find her dummy and lay her back down she’ll…. No of course not, who am I kidding, she’s wailing before her head reaches the cot mattress. Fuck.

Fuck it, I’m getting her a bottle.

*Carry baby downstairs and one-handedly make up a bottle with now placated baby on hip. Return back to her bedroom*

Now if I juuuust lie you down calmly and quickly stick the teat of the bottle in front of your face…. Ace. She’s taken the bait. *repeat Indiana Jones and tense non-sleeping routine before drifting off again*.

*fumble dejectedly into her bedroom once again*

She’s standing up again. Oh Bollocks. That’s it, I give up. I’m taking her into the spare room bed with me.

*Pick up baby, climb into unpleasantly cold spare bed and try unsuccessfully to coerce resistant toddler into lying down calmly in the bed beside me*

*Endure approximately 20 minutes of toddler clambering over my weary form. Get kicked in throat. Toddler tries various new manouevres including headbutting my kidneys and sitting on my actual face*

*Toddler ramps up the mischief, culminating in the inexplicable pulling of my hair and poking me in the eye until I can feign sleep no longer*

Ok. Fine. You win. *fumbles around for phone*. Bloody hell where’s the Cbeebies app again? Ah, Ok. “There you go you little monkey. Knock yourself out. Mummy is just going to close her eyes for a few minutes”….

*Toddler wakes herself up faceplanting my boobs. Wails in my face and throws discarded smartphone at my head*

Right, that’s it, she’ll have to go back into her cot. Can you die from sleep deprivation? I mean, surely eventually your body just gives up, right? How close am I to that? I definitely feel a bit woozy right now, is that a sign?…

Bloody hell she’s still wailing. Dummy? Nope, no chance. I am too tired for this shit.

Why don’t you want to sleep like a normal person?!? Surely you’re knackered too? *Sigh*

*Scoop up toddler and trundle grumpily downstairs, muttering under my breath about sleep deprivation being a form of torture, whilst simultaneously feeling guilty and cuddling the now quiet and snuggly toddler closer*.

Where’s the bloody remote contr… Oh, there it is. Come on then Peppa, you bastard, do your worst.

*Retrieve blanket from behind the sofa*.

*Lie down, positioning rapt toddler in the crook of my arm so that she can lie down whilst retaining the ability to watch the world’s most annoying cartoon*.

*Fiddle with volume so that it’s at it’s lowest possible volume for toddler to still hear it whilst reducing my urge to tear my own ears off in protest. Rest eyes for a bit.* God I truly do despise that voice. They should do an episode where someone roundhouse kicks Peppa in the face for being an obnoxious twat…

4.15am *Actual sleep… For both of us* (Surely a true Christmas miracle at this juncture…)

Phase 7 – Disbelief and Incomprehension aka: The Morning

“CAN WE WATCH THE TELLY MUMMY?”

Jesus H Christ why is everyone shouting?!? Oh God no, not already, surely? *Crane neck to see wall clock*. Shit, it is as well.

*Rub eyes in a vague attempt to focus bleary eyes*

*Lift up corner of blanket and signal for my older kids to slide in next to us*.

*Lie limply underneath mass of wriggly children for as long as possible, hoping that the husband comes downstairs soon and can organise the Weetabix / juice / TV demands before the clamouring becomes too much*

Did you like this post? Why not check out some of my other blog posts. (Especially this one, because it’s a review of the best free online resources for helping your kid get to sleep.

You’ll also (probably) love The Mum Conundrum facebook group. I try and post funny / interesting / useful stuff every day. You can also show me love on The Mum Conundrum Facebook Page if you fancy it, it’s always much appreciated.