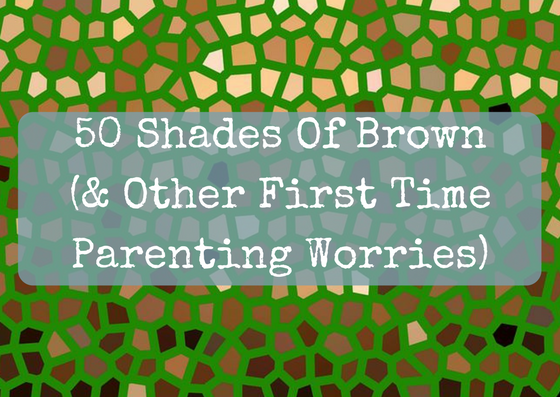 In the early days of having a new baby every tiny thing that Joshua did caused waves of panic and frantic Google action to make sure he wasn’t seconds away from a medical disaster.

High of the agenda for over-analysing was poo.

This went on to the extent that we would hold pictures from our BabyCentre app up against the actual poo to colour-match like we would previously have done in B&Q when matching paint with curtains and cushions. Then of course there was that one ‘poo fountain’ incident where everything within a 1 mile radius was splattered after little one’s tummy didn’t agree with some of his reflux medication – but let’s not dwell on that one!! Having a new baby isn’t all rainbows and unicorns…

These days our poo-related conversations are limited to pleading glances to each other to see which of us can make the other one feel guilty enough to change his nappy when the tell-tale waft fills the living room like pepper spray being fired at your eyes from close range!

However, back in those early stages after having a new baby, those excessive parenting fears seemed perfectly logical. After all we had been left with a baby to take home from hospital without a hint of an instruction manual but with a persistent fear drummed into us that one wrong move could lead to disaster.

As first time parents, the first few weeks / months / years after having a new baby everything seems important and potentially life-threatening! Every minor heat rash appears to be meningitis. Every cough is acute respiratory failure. Every cry is a scream of untold pain and suffering. Every time he lay under a yellowish light it was jaundice.

The baby monitor didn’t always help calm our nerves, with its magic movement sensor. Every time the alarm went off we raced upstairs like two fugitives escaping from captivity. Always to find that he hadn’t actually stopped breathing at all – he had just decided to lay at the other end of the cot away from the monitor pad!

Whenever his dummy even brushed a foreign object it would be whipped away for extensive sterilisation, unlike now where we just wipe off anything hairy and sticky, pop it back in and hope for the best!

Of course there were the sleepless nights during his colicky, reflux months where every night was spent trying to stop him from wailing solidly for 4 hours, followed by a 1 hour car journey around the mean streets of Reading to get him to settle. Those were some pretty dark days!

At some stage your little one will almost inevitably dive head first at an item of furniture that you had been debating making child-proof but hadn’t quite done it in time, leaving you to explain it all to the nurse at the hospital. Our little one certainly did…

Then there was the incessant feeling that our little one needed to meet his milestones as quickly as possible. Was that his first smile or just trapped wind? Did he roll over on purpose or by mistake? Did he really just say ‘hello Daddy’ or am I just hallucinating because it’s 4am and I’ve already been up 7 times since going to bed? Should he be eating solids by now? Shall we just give him a fish finger to hold and take a photo so we can tell everyone else how advanced he is?!

The competition with other parents from your social group adds its own tension.

‘Dave said his son can do ‘Head, shoulders, knees and toes’ already! Our one doesn’t even know where his head is!’

‘Denise said her little one can already recite the words to ‘The Great Gatsby’ whilst riding a motorbike and juggling machetes. She’s only 3!!’

So we would go along to baby swimming and baby rhyme time and baby story time and baby massage and baby first aid and baby mountain climbing and baby poetry and baby piano recitals and baby driving lessons. Anything to keep the little one occupied and to show beyond all doubt that we were being excellent interactive parents.

They would pretty much all take the same theme – little one would be interested for around 7 minutes and then start trying to wander off. The rest of the session would then be spent wrestling with him to keep him sat down like trying to hold on to a particularly oily squirrel as all the other parents watched on as if you had brought a randy octopus into the room with you.

Your approach to social media with regard to your little one is another thing to worry about. Do you post every tiny thing he does and hope your online friends will find it as fascinating as you do? Do you avoid showing your little one on social media at all, in case some whack-job decides to use his photo and details to create a whole new identity? Most importantly, do you post photos that may cause your little one embarrassment in later life, causing years of therapy and potential attempts to divorce us as parents?! Having a new baby doesn’t just effect your social life – it effects your social media life too!

Once you’re through all of the basic worries, you then have the first foreign holiday with a small person to battle your way through. Will they scream their way through the entire four hour flight, causing it to be rerouted to the arse end of nowhere and for you to be forcibly offloaded and banned? How often should you apply sun tan cream? What factor? Can you use the foreign germ-infested water to clean them? What if he gets sick abroad? What if he crawls off into the pool whilst you are supping your 12th Strawberry Daquiri? Do you take all of your own baby food from home in case local babies only eat frog legs or something?! Do they sell nappies overseas or are all foreign babies potty trained by 4 months?!

But now our little one is at school and all of the above feels like a distant, slightly disturbing memory! Although now he’s hard work in a whole different way we have started to feel like we know what we’re doing and are a lot less nervous about every cough and every rash. However, we certainly still panic every time he climbs up things or falls off things, given he’s been to A&E more times already than I have in my entire life…

For more amusing tales of life with a baby click here!