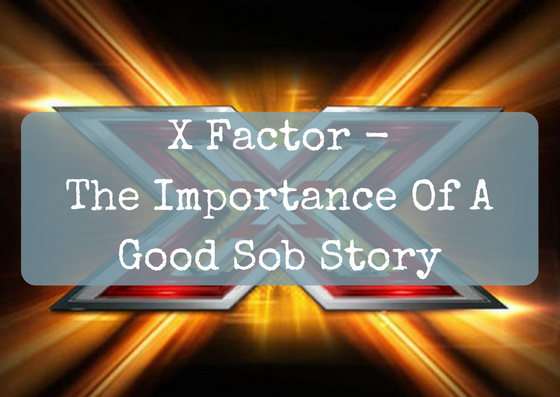 As I watched X Factor tonight with my other half we discussed the importance of having a good back story.

If you don’t have a decent, tear-jerking back story there’s pretty much no point in auditioning. Some of my favourite X Factor back stories are:

1. My grandparents have been so supportive, I’m doing it for them

So you’re saying that you’re trying to become a pop star to impress your grandparents?! Implying that actually you don’t really want the fame and fortune yourself but you just want to make them happy – as if they have spent their last 20 years hoping and praying that their grandchild would become a pop star. Then follows the obligatory appearance of the aforementioned grandparent in the audience wearing a T Shirt with the contestant’s face on it. Then a trip to the grandparents’ house. Then something about the war. In reality the poor nan would probably much rather be down the bingo drinking a nice G&T than hauling herself up to London every Saturday night and having a film crew setting up in her gaff.

2. I just want to do this to improve my life and my family’s lives

Yes, that’s all good but then we have to sit through dimly lit video footage of council flats and caravan parks with rats running past just to show how bad they have it. ‘This is the room where I live with my 17 siblings and that is the hole in the floor because we can’t afford a toilet, and that is the large bucket of porridge that we all eat for dinner because we can’t afford food. And we all have cholera, and my brother is still recovering from rickets, and my sister has just recovered from the bubonic plague and my mum gets a burning sensation when she goes for a wee.’

3. I come from a small village just outside Tinyville in the middle of nowhere and things like this just don’t happen to people like me

4. I’m going through a really tough time at the moment. I’ve just heard that the goldfish that my aunt’s milkman had in 2012 has been off his food and they don’t know if he’s going to survive

Leading to films of the goldfish and the contestant breaking down in tears at opportune moments, and a newspaper article about goldfish. All filmed in black and white with a piano playing in harmonious discord in the background.

5. I NEEEEEEEEED this. It’s all I know how to do. It’s all I’ve ever thought about

Although the contestant is only 16 and is still at school, their entire lives have allegedly been dedicated to music. They went to a dance class once. Watched MTV a few times. Went to a Little Mix concert. Tweeted Justin Bieber.  Your life will not end just because Louis Walsh doesn’t compare you to a young Tina Turner. Suck it up and crack on.

6. I just CAN’T go back to my day job. It just doesn’t make me happy

Accompanied by a soft focus video of ASDA and a mock shift in the checkout, just to illustrate the abject misery of working a normal job. Those normal jobs like the rest of us do.

7. I have a baby and I just really want to give him / her a better life

So to achieve that noble objective you have decided to aim for a place on a live TV show where you have to live in a contestant house without aforementioned baby for 3 months?! To ultimately seek out a career where you will spend your time touring the country and hardly ever be at home. Where your baby will grow up being filmed and photographed at every opportunity. Top plan.

8. I’ve auditioned 7 times before and I really think this might be my last chance

Perhaps take the hint and stop bothering? If each rejection sent you into a ‘really bad place‘ and it’s taken ‘everything you have‘ to come back again maybe just DON’T BOTHER!

One thought on “Want to Win X Factor? Got a Good Sob Story?”