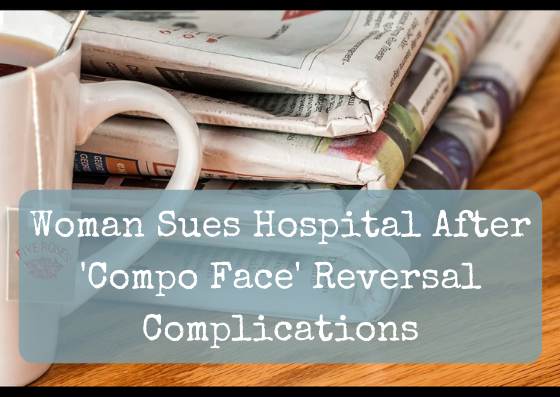 A woman has filed for damages following a ‘botched’ operation to reverse the effects of excessive ‘compo face’.

Donna Blitzen, 32, from Colchester, had been left with permanent muscular damage to her face after having posed with an excessively sad face for local newspapers an incredible nine times in the six month period leading up to Christmas.

These included the following headlines:

Woman distraught after discovering Lego Rocket Launch Station had no engine, wasn’t life size and couldn’t fly to the Moon

Tragically, following her final appearance of the year in Colchester Cares newspaper after her partner discovered what his present was going to be by checking his internet banking app after Donna had used his credit card to purchase the item and thus RUINING CHRISTMAS, she started to experience reduced facial function.

Her partner, Dave, told us:

At first, I just thought that Donna had the right hump because I’d set the temperature on the oven at 170 rather than 165 degrees for the turkey. But then she still looked like she had the arse when opening the Hoover I’d bought her for Christmas. It wasn’t like her at all, as normally she’s a proper bundle of joy.

When it became obvious that Donna was having face problems her mum suggested she might be having a stroke. Even when I joked that she hadn’t done that since my 30th birthday, Donna still didn’t even crack a smile.

It was then I realised that she’d had a face like a slapped arse since that last photo for the newspaper the day before, so I rushed her to hospital to get her compo face sorted.’

Shockingly it was there that the real trouble began for Donna. After a lengthy procedure to relax Donna’s facial muscles she woke up the next day to discover her face looked EXACTLY THE SAME as it did before the facial issues began.

‘I was absolutely DEVASTATED’, she told us. ‘I thought at the very least they would have sorted out my wrinkles or straightened my nose up a bit whilst they were digging around inside my face. I’ve paid my taxes, on and off, for 8 years and this is the thanks I get from our supposedly wonderful NHS.

I wish they hadn’t bothered. At least then I wouldn’t have had to pull twatish sad faces whenever I appear in the papers in the future because I would have already had a permanently twatish sad compo face. It’s just not fair.’

Donna is looking for £1,000,000 in damages for the emotional distress of looking in the mirror at her own face. The case continues.