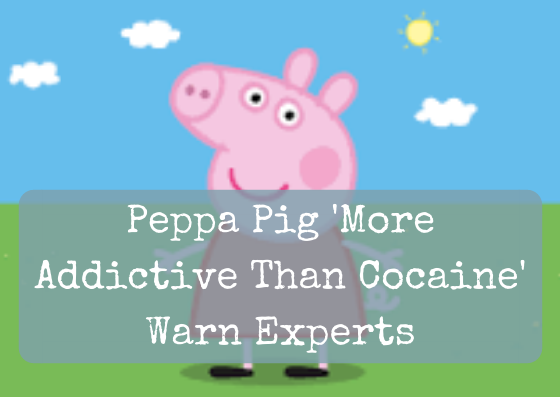 Experts at the University of Stupid Comparisons have conducted extensive research into some of the most popular toddlers’ TV programme, looking at the impact on the minds pf children and the notion of ‘Peppa Pig Addiction’. They have concluded that the lovable, pink, puny-legged porcine and her wonky-eyed family produce an effect on the brain more powerful than the white powder used by knobheads, celebrities and celebrity knobheads.

What’s more, they shockingly conclude that watching ‘In The Night Garden’ gives an effect similar to LSD, and that watching just 5 minutes of ‘Dora The Explorer’ causes pain similar to being kicked four times consecutively in the testicles by the hind legs of a mountain goat.

Researcher Helen Earth explained that their research centred on a network of hidden cameras installed in 22 homes across Berkshire. Helen explained, ‘we were originally planning to just focus our research on 2 volunteer homes, but when ordering the hidden cameras some dickhead accidentally ordered 22 instead of 2, so when they arrived we felt it best to expand our research accordingly – and we were glad we did because we found some incredible, statistically significant results’, offering insights into Peppa Pig addiction.

The week before some popular kids’ TV channels were installed into the test houses, researchers found that the subject parents were constantly needing to entertain their toddlers, primarily by pushing colourful plastic things around the living room, and reading / prodding books with titles such as ‘That’s Not My Dog / Cat / Monkey / Donkey / Bear / Car / Spaceship / Vodka / Boiler / Bluetooth Headset / Radiator / Locking Wheel Nut’. Some parents were seen feeding their children with lovingly-prepared home-cooked meals, taking trips to the park, pushing them around in giant plastic cars and teaching them phonics, words and phrases.

On day 1 of the experiment, either Nick Jr, Nick Jr Too or CBeebies were installed into each house and all other channels scrambled between the hours of 7am and 7pm. Within hours, researchers noticed some significant changes in the behaviour of the toddlers subjected to Nick Jr Too. Assistant Researcher, Mini Mumwage, described some of the footage she had ploughed through. ‘As soon as Peppa Pig came on, the toddlers stopped playing with their toys and sat motionless on the sofa until the episode ended, as if transfixed by the pink piggy protagonists. As soon as the credits ended, the toddlers would leave the sofa and start playing with their toys again. It was quite freaky to watch’.

During these 5 minute segments of peace, parents started to find that they could do things that would otherwise not have been possible. One parent could be seen doing some washing-up. One recorded an Instastory, desperate to attain 10,000 followers and the coveted Swipe Up feature. Another parent ate a chocolate biscuit in full view of their child. One parent even managed to take a piss without their toddler pointing at their under-utilised todger and repeatedly saying ‘willy’.

Day 2 of the test gave the first indication that something was happening within the toddlers’ brains, as most of them could be heard waking up in the morning and shouting ‘piiiiiiiiiiiiiiiiiig’ repeatedly until the TV was turned on, and then reacting in quite a distressed manner when all that could be found was the curiously punctuated ‘Alvin!!!!!!!!!!!! And the chipmunks’. Mini revealed that ‘it became clear that whereas on Day 1 the toddlers wanted to watch Peppa Pig, by Day 3 the toddlers needed to watch Peppa Pig – and not just one double-episode, but 3 or 4 episodes back-to-back.’

It wasn’t just the toddlers that were being impacted by Peppa Pig addiction either. Footage from Day 4 showed one parent ignoring the door-bell because she was intent on finding out if George Pig’s missing dinosaur would be found (it was, fortunately, up a tree). Meal times were becoming more ad-hoc, with home-cooked meals being replaced with Oat Bars, microwave pasta dishes and bananas fitted in the tiny window between episodes. Trips to the park turned into a few minutes in the garden squeezed in when ‘Topsy & Tim’ or ‘The Baby Club’ was on. ‘That’s Not My Duckbilled Platypus’ was replaced with ‘Peppa’s Birthday Party’, and games involving plastic toys were replaced with temper tantrums involving the throwing of plastic toys when Peppa Pig episodes ended.

A number of parents, even after their toddlers had gone to bed, could still be seen watching Peppa Pig episodes, as if in a state of trance. One cringeworthy-TV-obsessed father even missed 3 minutes of Naked Attraction, as he was so intent of finding out whether a mate could be successfully found for Goldie, Peppa’s Goldfish. Tragically he missed out on discovering the reasons why a self-proclaimed ‘pussy expert’ had chosen to eliminate the woman in blue from the competition purely based on the lower half of her body.

Another mum could even be seen attempting to buy the fictional computer game, ‘Happy Mrs Chicken’ on Amazon Prime during an exciting part of ‘Dancing On Ice’.

On Day 7, Nick Jr Too was switched off for good and toddlers and parents were left to go ‘cold turkey’. There were cold sweats, tears, incomprehensible screaming and bizarre mood swings. The toddlers also struggled.

One parent took extreme measures and downloaded an illegal copy of Ben & Holly’s Little Kingdom to take the edge off his cravings. Another parent took their toddler to a local petting zoo and could be seen hugging and attempting to converse with a real-life pig, albeit with limited success. One family even went to Peppa Pig World and spent over £100 to queue in excess of an hour for each of the 4 rides they had time to go on!

All test families are now being weaned from their addictions by trained counsellors who are using the slightly less addictive Paw Patrol to help reintegrate them back into society.

Those families who were left to view nothing but episodes of ‘In The Night Garden’ had a more confusing time. Although the effect on the toddlers was similar – glazed eyes, drooling mouths, temporary deafness – parents could be seen staring at their offspring with an embarrassed disbelief. One mother could be heard muttering ‘I grew you for 9 months, went through 3 days of labour, and have spent the last 18 months teaching you about the world and THIS is the kind of shit that you enjoy watching?!’

Mini explained that ‘In The Night Garden is such unmitigated bollocks, that the only possible explanation for toddlers being transfixed by it is that CBeebies must be transmitting some form of hidden mind-controlling messages within the broadcast, much like in the later Beatles albums.’

Finally, those families subjected to the nauseatingly perky ‘Dora the Explorer’ lasted just one day of the experiment, as regrettably all of the subject parents had gouged out their own eyes with plastic spoons by lunchtime. But each one reported that they could still feel Dora’s cold, dead eyes staring at them while they slept and researchers say that this is something that is likely to haunt them for the rest of their lives.

‘The way that Dora constantly stares at the viewer with her massive, brown, psychotic deer eyes is genuinely disturbing. Couple that with 3 of the main characters being a monkey, a map and a backpack, the seemingly random use of Spanish words and a constant attempt at trying to interact with the completely disinterested viewer and it’s a recipe for disaster. People just don’t need that kind of shit in their lives’, revealed Helen.

All families are now recovering well from their ordeals.

If you enjoyed that tissue of lies, you may enjoy our other humorously dubious parenting tales.