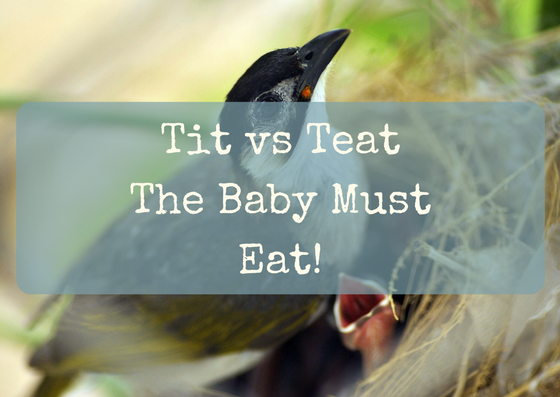 No parenting blog would be complete without giving a mention to the old boobie or bottle debate.
I’m not here to lecture. If you managed to get the mammary glands fully functioning then that’s great, but if not, it’s no big deal. Whether by tit or by teat, the baby must eat!

For me, breastfeeding did not come easy. I’d always said that I’d give it a go, but man that shit is hard, and I genuinely take my hat off to any woman who breastfeeds successfully

Minutes after giving birth, while my insides were probably still on the outside, the baby was plonked on my chest for her first ever feed.
She latched on like a dream, suckling away like there was no tomorrow. I thought to myself ‘it’s a piece of piss this, don’t know what all the fuss is about’. Oh how naive I was!

Fast forward a few hours and it was time for the next feed. Except this time it didn’t go quite so smoothly…

“Babies forget what to do after the first feed, so you have to teach them”, explained the midwife. Forget! How’s she forgotten already? She only has one bloody thing to remember!

And so began my three hourly battle of trying to get my nipple into the baby’s mouth. It’s like when the England team take penalties, it just wouldn’t go in!

We tried all the positions – the rugby ball hold, cradle hold, koala hold, downward dog (no wait, think that’s something else).
I tell you, considering a newborn isn’t supposed to have any head control she could certainly control her head away from my nipple!

Most of the time, it was a two-man job, one to hold the boob and one to hold the baby. This was fine when my other half was around, but not so easy when he wasn’t. And I didn’t really feel it was appropriate to ask the window cleaner to lend a hand. He’d only knocked on for some water.

We even had a breastfeeding expert pop round to give us some tips. After a quick assessment that my nipples were in fact ‘normal’ (yay for me) she concluded there was no good reason why the baby shouldn’t latch. Basically I was just shit at it.

The times I did manage to get her on the boob, it bloody hurt! It was like pissing razor blades. The ‘expert’ explained that when the baby comes off, if your nipple looks like a lipstick, then the latch is wrong and it will hurt. I don’t know about a lipstick, mine looked more like a dog’s dick – no bloody wonder it hurt!

Whenever you see women breastfeeding, they always make it look so easy and discreet, but my version was anything but.
For a start, I couldn’t just slip my top down and pop the baby on, no I had to take my top and bra right off, as it all seemed to get in the way.
I remember watching on with envy at Sam Faires on Mummy Dairies, who makes it look particularly effortless, meanwhile I looked more like Neil the Sofaworks sloth, sprawled across the settee with my babs out.

I’m all for breastfeeding in public, but my version was definitely not for public consumption. I think I would have been done for outraging public decency if I’d tried it in Costa.

The other thing that makes it all the more difficult is the constant stream of visitors you get with a newborn. You’re just trying to get to grips with the whole breastfeeding debacle and there’s another knock on the door.
It might be the most natural thing in the world, but no visitors need to see me sprawled out on the sofa like Jabba the Hut while trying to wrestle my nipple into the baby’s mouth.

There was screaming, crying, wailing – and that was just me! In the end, I lasted six weeks before I gave it up as a bad job. All I can say is thank God for SMA!

This post was first published here. For more from Why Keep Mum? click here or check out some recent posts below!