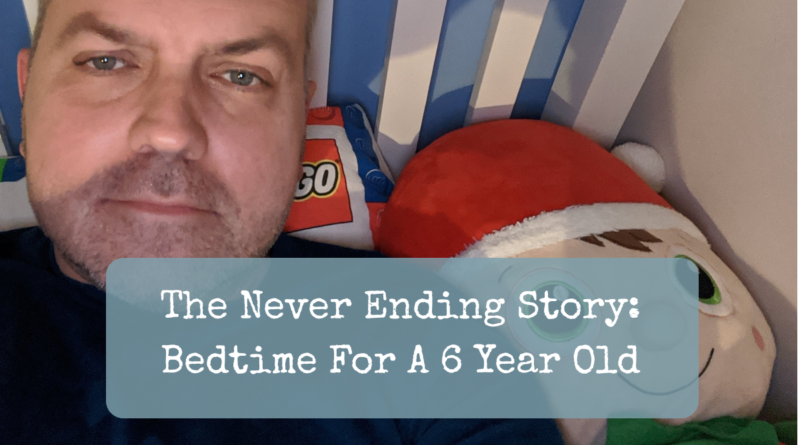 Joshua has never been a massive fan of going to sleep. From birth he would much rather spend the evenings screaming the house down than to get some shut eye. Naps were only achieved in the car or by what must have been hours of gently rocking his little bouncy chair. Night times were a battle of wills, with hours in the car spent driving around the streets of Reading trying to get him to sleep, followed by ninja skills in transferring him from the car to his bed.

As the years have gone by it has got easier of course. There are no longer evenings spent trying to calm down a seemingly permanently livid baby, rocking him in your arms as the muscles in your arms and lower back gradually seize up. No more scenic tours of Berkshire. No more painstaking attempts at successful swaddling, only for him to wrestle his way out like a miniature Houdini within minutes.

The Stages of Bedtime For A 6 Year Old

But it’s still not quite a five minute process. Oh no, no, no. Bedtime for a 6 year old still takes some work. It’s still some kind of military operation, where both sides try out a range of different tactics each night in a bid to defeat the opposition. But there are no winners in this battle. Just varying degrees of defeat. So let battle commence as we look at the stages of bedtime for a 6 year old…

Bed time is 8pm in our house – for Joshua at least. So the general sleep-preparation process begins around 730. Weirdly this tends to coincide with Joshua just having started watching a programme on TV, or just having reached a critical part of a game on the Xbox that can’t be saved, or a work of art having just reached a vital stage in the colouring-in process.

I’m assuming he got the word ‘just’ from us somewhere along the line (I can’t play shops as I’m just cooking dinner / I can’t bounce on the trampoline as I’ve just had dinner / I can’t find that missing Lego piece as I’m just doing a few work emails) so really it’s our own fault. But if he’s just in the middle of something he sees that as being set in stone.

The Need To Read

The bedtime routine generally involves him reading his school book and us reading a story. Seemingly he loves reading again lately, so the prescribed 15 minutes of reading isn’t quite enough. He must finish his school book before he can sleep.

This was fairly straightforward in the halcyon days of Biff & Chip, but gold books tend to have 31 pages. One of the bastard things had 60 pages the other day, clearly written by someone who hates the thought of kids sleeping. Joshua likes getting immersed in the stories – especially at bedtime – so each picture must be studied in detail, plot predictions must be made and general discussions about the text must be engaged upon. If he brings home War & Peace next week we’re pretty much screwed…

Bath time generally consists of the bath being ‘burning hot’ and therefore inaccessible for lengthy periods. Even if all of the hot water is removed and replaced with melting ice, the bath is still deemed to be too hot. When it reaches an acceptable temperature he generally then decides he needs a poo. Again it’s probably my fault for taking a while in the toilet in the past whilst checking emails / scrolling the internet / writing blog posts) but he takes an absolute age in there. Finally, after the best part of two hours, he emerges and is ready to brave the now frosty bath water.

Obviously extensive conversations about crucial world topics must be discussed in the bath before he can get out again, thus further lengthening the bathing process.

Once finally out of the bath we have the daily mystery of the disappearing pyjamas. They are generally placed right next to him, or even put on top of his head, for ease of access. And yet within seconds they have disappeared without a trace. The other day he managed to lose a pair of pants that he was actually wearing. These were later found down the back of the sofa having been kicked off for no apparent reason.

Once the pyjamas have been relocated and put on, we move on to the hide and seek phase of proceedings. This usually takes place when we’ve left the room for around 4 seconds to grab a toothbrush. He’s always hiding behind the big red chair, he always asks if we can find where he is and he never understands how we’ve managed to find him.

So he’s in his pyjamas, he’s bathed, brushed his teeth, been found hiding behind the red chair, read a couple of novels and eaten the contents of the fridge and he’s finally in bed.

Now comes the time when he discovers one of his teddies is missing and that he cannot possibly sleep without him / her / it. Joshua always brings a few down from bed in the morning, but it’s different ones each day and they tend to end up in different places depending on what he was doing before school. So the hunt begins.

Once Sheepy / Lamby / Horsey / Monkey has been found and returned to the bed, the sleeping process can almost begin. There’s normally a few sips of water, a bit of cream on his lips and a few random bits of urgent conversation (Frankie’s uncle is going to die today – I think he was run over by a car / when I grow up I’m going to be a superhero / how do you learn to make Xbox games?) but you’re definitely on the home stretch.

‘Daddy, can you stay in my room for a little while?’ generally comes next. This is the time for any last minute nuggets of information to come out. ‘Daddy, someone tried to snatch my hoop off me at break time today’ / ‘Daddy, did you know that Master Wu became a bad guy, but then he was a good guy again, and Lord Garmadon became a good guy too?’

Then finally the breaths start to deepen, the questions start to subside and it’s time to depart.

‘Night son. Love you lots, sweet dreams, see you in the morning.

‘Night daddy, love you more than anyone’.

If you enjoyed our tales of bedtime for a 6 year old and want to read more about the school years click here!