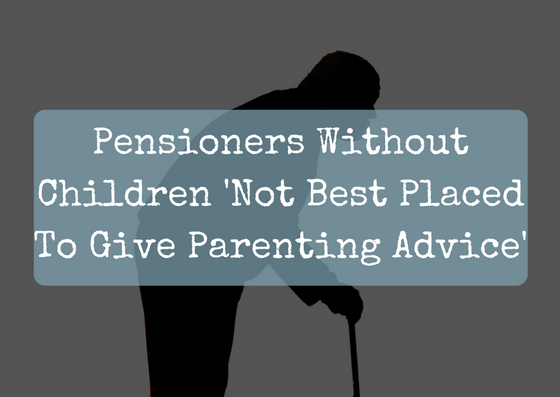 A shocking study has revealed that men and women in their 70s and 80s that have never had children are not fonts of all knowledge when it comes to modern parenting, contrary to their own beliefs.

The survey of 100 pensioners found that 99.87% of parenting advice given by people in this age bracket is actually complete jibberish and bears no resemblance to anything you would find in modern parenting manuals. Some of the gems of wisdom that were bestowed upon researchers during the study period were:

There is growing evidence that ‘walloping’ children may not actually be the panacea to all of their emotional outbursts, with some guides suggesting that physically attacking your offspring may even have some negative psychological impact on them. Some scholars have even suggested that twatting your child may actually make you look like a bit of a cock in the process.

Lock him up and throw away the key

Locking children up is generally frowned upon in modern society, regardless of whether the key is subsequently thrown away or not. Throwing away the key has been found to actually make life more difficult for parents given that at some stage you are likely to need access to your child – to take them to school, for example.

Just leave him there – he’ll soon get the message

Very few modern parenting guides will recommend leaving your child behind, be it in a supermarket, bank, or even on public transport. In fact, the ‘message‘ that the child is likely to ‘get‘ from being left behind is that you probably shouldn’t have had kids in the first place.

In my day kids were seen and not heard

Whilst this may be the case, times have moved on somewhat. We also don’t piss in the street, use semaphore signals, catch pigeons for lunch, use newspaper to wipe our arses or send children to clean chimneys these days.

Just tell him to stop doing it

A small proportion of parents find that simply telling their child to stop doing something doesn’t always work, especially when that child is a nonsensical, irrational, megalomaniac. Telling a toddler mid-tantrum to stop tantrumming is comparable to telling a bird not to shit on your windscreen or a politician to stop telling lies.

You need to show him who’s boss

The unfortunate flaw in this gem of advice is that the child is always the boss. The parent is, at best, a personal assistant, purely there to serve at the whim of the child.

Researchers advise that if you are approached in public by a childless, interfering pensioner who starts getting ‘all up’ in your parenting ‘business’ you should follow these 3 simple steps:

There’s a very high chance that you are doing a perfectly good job already and that they are just talking bollocks.